An Unsung Hero in the Fight Against Chancery Court Corruption 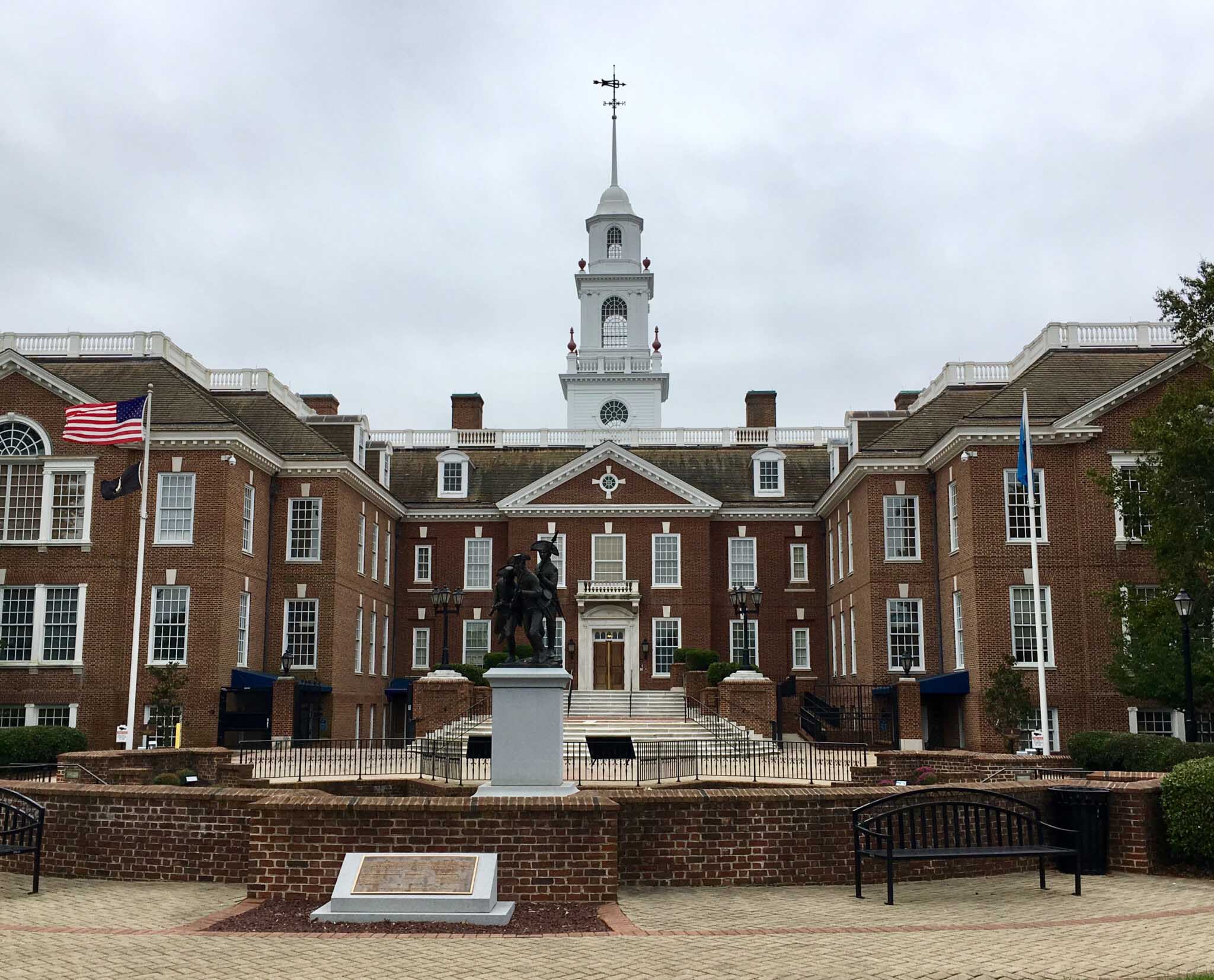 In what I view as the TransPerfect fight against Bouchard’s corruption in the Chancery Court, there are so many unsung heroes. Thankfully, the employees stepped up and successfully lobbied against Bouchard’s appointment to the Delaware Supreme Court. Without these heroes, in my opinion, one of the most corrupt lawmen in U.S. history would have been appointed to our state’s highest court.

The employees’ lobbying was selfless, in that, by helping make it so, Bouchard was rejected for the Delaware Supreme Court job. Also accomplished: 1. Delaware finally appointed a Black justice, and 2. They left themselves stuck with what I see as a corrupt, angry, capricious, dishonest little man for a judge who hurts Delaware. SIX YEARS LATER, Bouchard is not only still motivated to enrich his friends — also, in my opinion, he’s out for revenge for his lost DSC job — his retribution comes in the form of continuing to allow the fleecing of the company, and thereby, its 6000 employees.

People will never know most of the unsung heroes that both saved TransPerfect, and as I see it, saved Delaware from one of the darkest moments in state history, appointing a corrupt political animal like Bouchard to the DSC. Delaware truly can’t ever repay these dedicated patriots, but I will highlight one, whose name has come up again and again, in my countless interviews with employees over the years: Martin Russo.

Martin Russo is owner of Russo PLLC, and is the Chief Legal Strategist for TransPerfect. He is a Harvard Law graduate and his documented adventures fighting the cronyism, corruption and backroom deals that define Bouchard’s “Delaware Way,” can be found here (www.russopllc.com/news), including:

“In re: TransPerfect Global, Inc., C.A. No. 9700-CB Affirmed by Delaware Supreme Court:

Russo PLLC successfully guided Philip Shawe to victory in the Delaware Chancery Court after that court had for the first time in history ordered the draconian remedy of a forced sale of a successful private company against the wishes of half of the shareholders. With Martin Russo serving as the chief strategist, Russo PLLC and a team of exceptional co-counsel from other firms navigated past the negative allegations made by Elizabeth Elting and secured approval of the sale of TransPerfect Global, Inc. to Mr. Shawe.”

From listening to many of the TransPerfect employees’ tales of their fight to save their jobs, I could write a thesis on Mr. Russo, but perhaps it’s best to introduce you to the man who bested Bouchard and his cronies by introducing you to him, in his own words, from this 2016 editorial on the subject, published by Crain’s New York Business magazine. Enjoy today’s topper, and please call your elected leader and tell ’em to make Bouchard’s vengeful and blood-thirsty looting stop!

As always, your comments are welcome,

In my opinion, the sanctions decision itself is indicia of an extreme court bias against Mr. Shawe. Although Mr. Shawe was given notice on particular grounds, the court permitted Elting’s team to change its theory at trial without proper notice because Elting had insufficient evidence of the issue they had sought to sanction Mr. Shawe for: alleged spoliation. The “evidence” against Mr. Shawe on spoliation was almost exclusively based on lawyers’ arguments (not evidence by definition in any court) and a cherry-picked paid “expert” witness who had never testified before in a U.S. Court. The truth of the matter is that Mr. Shawe provided more discovery than Elting produced, and her legal team could not identify a single document that allegedly had been destroyed or withheld and caused her “prejudice.” In fact, she claimed victory on the merits.

Indeed, after the merits trial, Elting’s “expert” admitted that his findings used as a basis for filing the sanctions motion were untrue because he had not investigated the issue well enough before Eltings’ team made the allegation. Faced with this deficit of evidence, Elting’s lawyers appeared at the sanctions trial with a new theory of “lying” which had never been raised before. Shawe was tried and sanctioned for allegedly “lying” without due process.

As a consequence, it is neither surprising (i) that the court did not find the deletion of relevant evidence nor (ii) that Mr. Shawe’s attorneys were not adequately prepared to defend him against the variance in trial theory. Such unfairness is not consistent with due process. Had they been given notice of the new “lying” theory (including what issues he allegedly lied about and when), it is likely that Mr. Shawe’s lawyers could have prepared and presented evidence demonstrating that the differences in recollection were nothing more than just that – with other disclosures in the record that make them immaterial.

The recent ruling on the amount of sanctions to be paid is more of the same from the Chancellor. Although the court did reduce the fees in some instances, it utterly failed to provide due process with respect to the reasonableness of many of the fees claimed. The most extreme example of this failure is the acceptance of more than $1.4 million in merits fees from the Potter firm based on the affidavit of Mr. Shannon without any actual billing descriptions to back up the claim. It begs the question: How can the reasonableness of fees be assessed if the court doesn’t even know what work was performed? Such curious decision making is unfortunate because it also lends some weight to the speculation by others that there is a reported personal and professional relationship between Mr. Shannon and the court which may be affecting this case. I know of no such relationship and am not asserting that there has been any impropriety but accepting more than $1.4 million in fee claims without requiring backup is contrary to traditional notions of fairness. Mr. Shawe is considering his appellate opinions.

There also have been other indicia of court bias against Mr. Shawe. During the merits trial, the Court had to address Elting’s allegations of wrongdoing leveled against Mr. Shawe relating to his review of her emails on the public company server. Mr. Shawe asserted that the emails proved that Elting committed fraud and requested that Chancellor Bouchard examine the emails in camera (in private) because they proved fraud. The court was well aware that if fraud was found, it would remove the emails from any supposed claim of “privilege” (under the crime-fraud exception), but Chancellor Bouchard inexplicably refused to review them–yielding to Elting’s position with no basis in law. Chancellor Bouchard abandoned his sworn duty to equity and justice in this regard. Instead, without consideration of the content, for the purpose of the merits case he suppressed the very emails which may prove Mr. Shawe’s assertion that Elting and her attorneys engaged in a scheme to provoke Mr. Shawe and create actionable discord in the company.

These and other indicia of bias (such as the remarkable success rate of Elting’s team on all motions – which her attorneys bragged about in a Law360 article) are particularly concerning given the recent unsolicited and inappropriate negative public statement by Vice Chancellor J. Travis Laster which was directed at the free speech activities of TransPerfect employees who have been appealing to the media and the public. It is the duty of judges and lawyers to avoid the appearance of impropriety and this unprecedented instance of one seeking judge commenting on the active case of another may not be consistent with that mandate – especially when it may be interpreted as an attempt to quell ﬁrst amendment rights.

At this point, the case has been certiﬁed for interlocutory appeal, and I am conﬁdent that the Delaware Supreme Court (or, if necessary, the U.S. Supreme Court) will reverse both the sale order and sanctions order based on the law. With respect to the sale order, ponder this: the facts reported in the decision by Chancellor Bouchard clearly support a ﬁnding that Elting breached her ﬁduciary duty by refusing to consider real estate and merger/acquisition opportunities without regard to their merit, so how is it possible that a person with unclean hands (Elting) can come to Chancery Court and obtain relief? When similar claims were brought by Elting in New York State court, it was tossed out with the sense that the whole litigation was absurd, and the parties needed to come to a solution on their own. Justice Schweitzer speciﬁcally found that it was “unclear who drew ﬁrst blood.”

Mr. Shawe is resolute that the company is an industry leader that never faced irreparable harm regardless of any alleged acrimony between the shareholders. TransPerfect’s performance in 2015 was more successful than 2014, and it is on pace to perform even better in 2016 despite the litigation. He is conﬁdent that the company will continue to prosper and continues to offer $300 million cash to Ms. Elting for her shares.