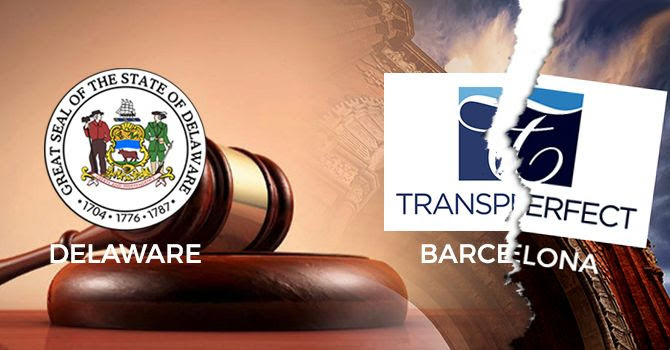 That Chancellor Andre Bouchard, in my view, continues to engage in a cover-up and hide documents by abusing his sealing power has reached a Spanish newspaper (links and article below).

As I’ve screamed from the mountaintops, this man continues to be a stain on Delaware’s image. Can our state really afford to have our judiciary be the laughingstock of the international press for arbitrary, capricious, and suspicious behavior? We don’t need continued damage to our economy from self-inflicted wounds such as from Chancellor Andre Bouchard!!!

To summarize, news from the TransPerfect case, in which Chancery Court Chancellor Andre Bouchard continues to hide court documents has reached a newspaper in Spain! The case has been closed now for 18 months. How long can we let the “good ole boy” cronies get away this?

Delaware citizens are rightfully concerned, and the Delaware legislature should act on these concerns through its power to investigate.The “good ole boy”, Skadden Arps network should not prevent Delaware from governing itself. The mass court-ordered transfer of wealth in the TransPerfect case from shareholders and employees to Bouchard’s close pals is the greatest miscarriage of justice on American soil since World War II.

And the icing on the potential corruption cake is that Bouchard’s Chancery Court — arguably the most powerful business court in all of America — is further violating the public trust by refusing to unseal court documents and refusing to open itemized Skadden Arps and other bills related to its 3-year “custodianship” of a successful company, which many Americans clearly view as an illegal occupation and looting.

So again, SHOW THE DOCUMENTS MR. BOUCHARD?!?! If you don’t have something to hide, why the cover up? By requesting this unsealing, as a recognized member of the press, aren’t I giving you and your cronies a specific chance to clear your names? Everyday you do not come clean and simply be open and transparent, you further cost Delaware its historic and respected credibility, not only in the U.S., but abroad as well!

The weeks pass but the opacity in the TransPerfect case lasts. The records and details of the conflict are still blocked by Judge André Bouchard. Meanwhile, the associations of citizens of Delaware redouble their pressure to see what the judge ordered to spend 250 million dollars in one of the most controversial shareholder conflicts in the history of the United States. The collateral effects of the dispute have also been noticed in Spain. During the conflict, the 4,000 jobs generated by the company throughout the world have been put at risk, of which 500 are located in Barcelona.

Grouped around the Citizens for a Pro-Business Delaware association ,citizens disapprove of Bouchard’s attitude, which, in addition to damaging the image of the State, goes against the current US legislative framework, which obliges the public to publish detailed information on resolved cases. A maneuver that demonstrates a clear intention to hide the records and invoices with the aim of covering up all the law firms and consultants that have profited from this conflict.

Pressure on the Delaware court system

The favorable resolution of the TransPerfect case, with the purchase of Phil Shawe from the remaining 50% of the company, making it possible to secure employment and maintain the growth path, has not calmed the mood in Delaware.

Resolved the case of the multinational translation, the case now focuses on the neutrality of the judicial system of Delaware, which is in question. This American state has fallen from the first to the eleventh position in the neutrality ranking of the country’s judicial systems, according to a survey prepared by the United States Chamber of Commerce. As a result, some companies – including TransPerfect – have moved their headquarters to other states in search of a more neutral and competitive system.

The Delaware citizens’ associations believe that this fall in Delaware’s neutrality and competitiveness is holding other companies from establishing their headquarters in the State and involves the flight of companies to other, more competitive places. Something that poses a high risk for employment and directly impacts the generation of new jobs.

Now, the goal of these associations is to highlight the irregularities that have been in the TransPerfect case by the State Chancellery and prevent a repeat case like this, in which a judge decrees the forced sale of a company private multinational with benefits and approves the expenditure of 250 million dollars in law firms and related consultants.

One of the firms that have profited the most in the TransPerfect conflict, with the consent of Judge André Bouchard, has been the Skadden Arps law firm. One of its partners, Robert Pincus, was appointed as judicial administrator of the company during the conflict precisely by Bouchard. According to data from the Citizens for a Pro-Business Delaware platform, Pincus would have received a salary of 1,425 dollars per hour to supervise the controversial forced sale of the company and would have presented invoices without details or breakdown, according to sources close to TransPerfect. Invoices that remain hidden today by the judge’s decision.

But the controversies that surround the firm do not end with the TransPerfect case and go further. In January of this year, the firm Skadden Arps agreed to pay a sanction of 4.6 million dollars (4.1 million euros) to resolve its responsibility with the Department of Justice of the United States for violating the Agent Registration Act. Foreigners (FARA) in political lobbying work done with Trump campaign advisor Paul Manafort to benefit the Government of Ukraine in 2012 and 2013 in favor of Yanukovych.

In this context, from Citizens for a Pro-Business Delaware demand to investigate the work commissioned by Bouchard to companies such as Skadden Arps, which have endangered thousands of jobs by targeting the division and sale of the company to funds vulture.