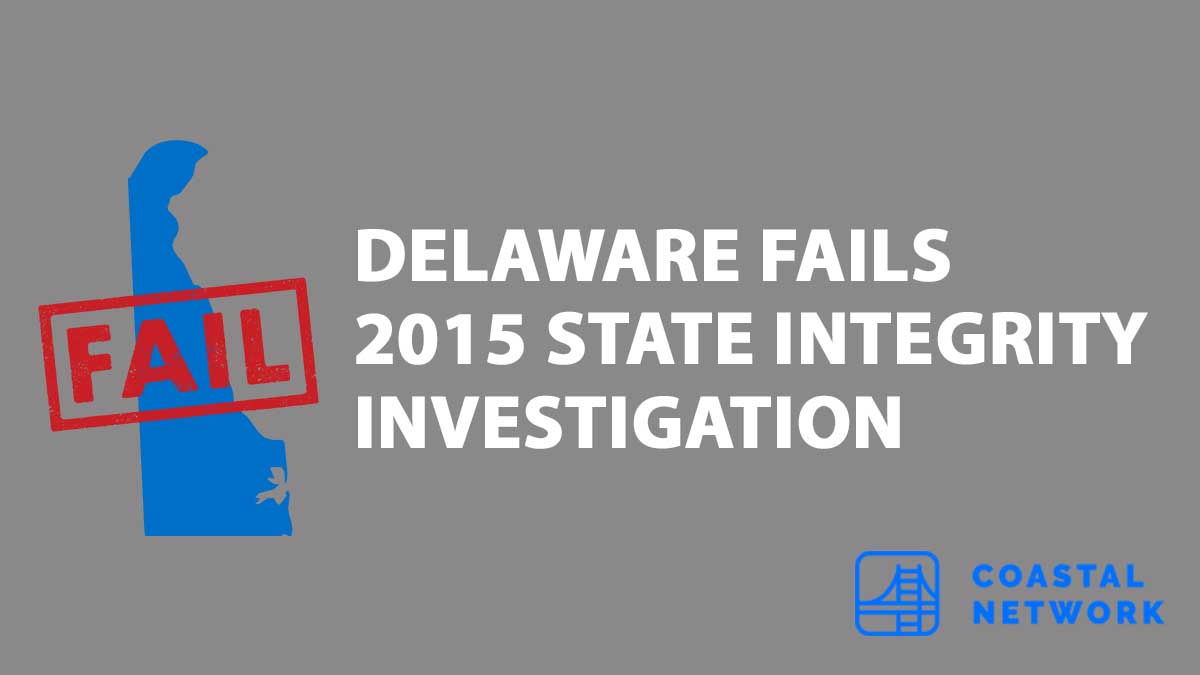 On a state integrity investigation conducted in 2015 in partnership with Global Integrity, Delaware received a failing score.

Global Integrity is a worldwide organization that researches and provides data on government corruption and use of public resources, then uses their evidence to shape policy and practice, while remaining committed to open governance. In 2015, The Center for Public Integrity partnered with them to conduct an inspection of all fifty United States. This report assesses the systems in place to deter corruption in our government at the state level. Delaware ranked 48th out of 50. Below are details on their lowest scoring categories.

Delaware scored a 46/100 in this category. While Delaware’s Freedom of Information Act does state that citizens have the legal right of access to government information, they only scored a 50/100 in consistency of actually providing the information to the public. There are many exemptions to the law, including the entire judiciary, state lawmakers, and any staff member working for the caucus of either the Democratic or Republican parties. Calendars and email of the Governor and all state legislators are not available to the public.

Members of the public must submit a written request for information, and wait for a response from an understaffed office with few resources. If denied, they can appeal to the Attorney General’s office, but they do not prioritize these requests. Their score on reasonable timelines for response to requests was 25/100.

Not only is there no law in place to mandate that Delaware’s state pension fund is managed transparently, but there is also no requirement that Delaware’s Board of Pension Trustees include any experts in investment policy. Members of the Board are also not required to file annual financial disclosures, so this information can neither be audited, nor accessed by the public.

Delaware does have a state ethics office, the Public Integrity Commission, but it is only tasked with overseeing the executive branch. It is funded by the Department of State, making it subject to political negotiations. It is underfunded, with a budget of $188,500 in 2013 (for comparison, Rhode Island’s ethics agency had a budget of $1.5 million that year) and has just two full-time employees. The results of its audits are subject to privacy laws that render them inaccessible to the public.

Perhaps the most frightening discovery of all is the level to which the judiciary branch of Delaware’s government is accountable only to itself.  The courts operate largely in secrecy, deciding for themselves what information is accessible to the public and what is private. There are no laws in place to protect against nepotism, cronyism, or patronage, and state judges are not required to disclose any gifts received by family members or with a value of less than $250 in their annual reports. The judiciary investigates and penalizes its own members when they are accused of wrongdoing, and there is no legal process in place to evaluate the performance of state judges.

In reading the full report, it is easy to see that Delaware has much room for improvement when it comes to transparency of government, and these laws must be updated to increase accountability for our state officials. The Delaware government must work for its citizens; there is currently too much opportunity for corruption within the system,