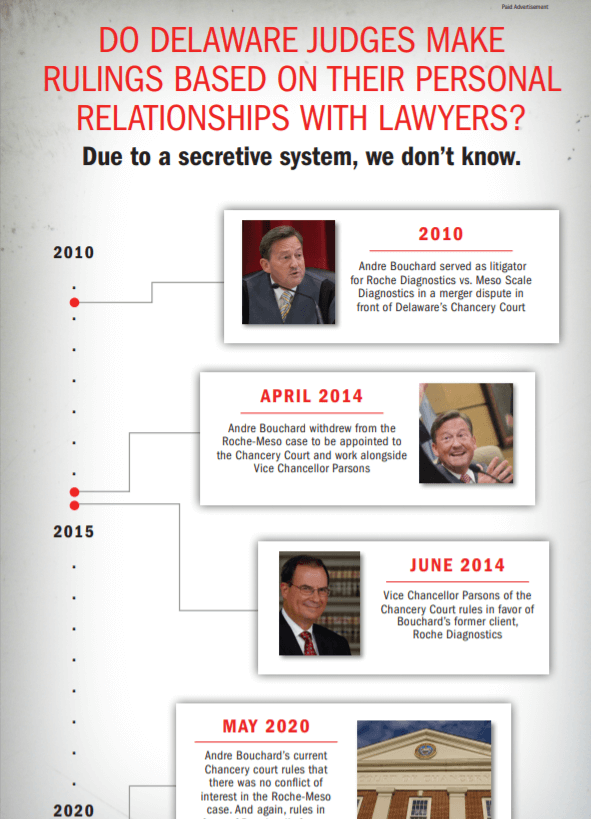 There is a large question that looms over Delaware’s Chancellor Kathaleen McCormick and our once-esteemed Chancery Court: Will our new Chancellor do what’s right and restore the Chancery Court to its former glory? The answer will define her legacy. Much is at stake, folks.

Even now, she has a chance to have justice prevail regarding her far-too-swift decision to deny due process and grant Skadden Arps’ motion approving past billing practices in the TransPerfect case, which I wrote about. Thankfully, she saw the error in her original decision and is now allowing TransPerfect to make their case. True justice will require an even hand and fair treatment of both Skadden Arps and TransPerfect, not rolling over for Skadden at every turn like former Chancellor Andre Bouchard.

Skadden has now billed TransPerfect more than $44 million dollars in undocumented fees, as I understand it, and the auction was over in November 2017. TransPerfect has spent much of their money attempting to see the itemized bills of Skadden, which was finally granted by Bouchard only after the company attempted to go to Nevada, where TransPerfect is now incorporated.

If Delaware is to retain its reputation, then McCormick must send a message to corporate America that custodians like Robert Pincus and Skadden cannot get away with their massive billing fraud. As I see it, paying custodians is much less important than maintaining integrity and preventing attorneys from committing billing fraud because they are friends with a Chancellor. In any other state, I believe that Pincus and his Skadden associates would be in a federal prison right now.

Hanging in the balance is McCormick’s hasty decision to rubber-stamp the outrageous billing practices Skadden got away with under former Chancellor Andre Bouchard. TransPefect is now stating its case against Skadden’s Pincus’ brazen overbilling. The future of the court may depend on getting this judgement right.

Will McCormick show that she’s open to what’s reasonable and just? Will she bring transparency and remove corruption from her Court? I will keep you updated as I am watching closely. Folks, I would love to hear your feedback and predictions about all of this. Your comments are welcome!