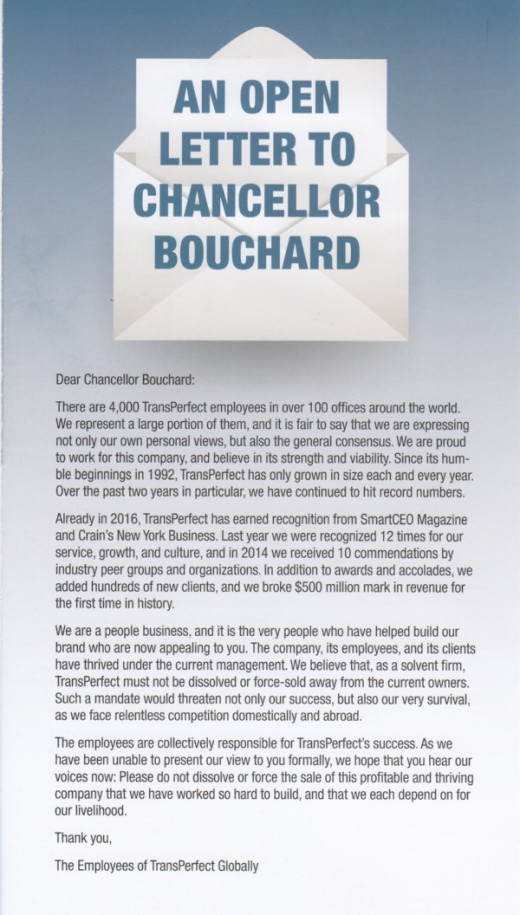 Chief Chancellor Excuses Potential Fraud and Could Force a Sale of a Viable Multi-million Dollar Company?

Delaware’s rookie Chief Chancellor, Andre Bouchard, is casting a dark shadow over his 2-year run as the Chief Chancery Court Judge. This was evident in one of his most recent decisions where he ignored overwhelming evidence and a pattern of behavior that I wonder could border on the illegitimate? Instead, he chose to rule in favor of a single party (Elizabeth Elting) who happened to be represented by his buddy Kevin Shannon. This culminated in a decision that has the potential to ruin a company and destroy the jobs and careers of 4,000 hardworking employees worldwide, 2,300 of them in the United States, nearly 1,000 in the northeast, and set a chilling precedent that could destroy Delaware’s longstanding reputation as the capital of corporate America.

Bouchard wasted no time in leaving his mark on the court with one of his first big cases, Elting v. Shawe C.A. No. 9700-B. It makes it clear that Bouchard is going to do things his way whether or not the law and evidence agrees with him. This decision is not so surprising considering Bouchard’s history of cronyism at the Register of Wills office in Sussex County. This case couldn’t help but remind me about the piece I wrote, on April 8, 2016, when I learned that one of the attorneys was Kevin Shannon from Potter, Anderson and Corroon. Mr. Shannon and Chancellor Bouchard have an illustrious history together, both working on the infamous case “In Re The Walt Disney Company Derivative Litigation” when Bouchard was a practicing attorney. In that case, a derivative action was brought on behalf of the shareholders disputing the $100 million payout Disney gave to Michael Ovitz after he was fired. Bouchard represented Disney and Mr. Shannon represented a fellow Board member Sanford Litvack.

Mr. Shannon and Chancellor Bouchard as recently as March 16, 2016 were co-panelists together in New Orleans at a Tulane University law panel. Considering Chancellor Bouchard’s history, it comes as no shock that Mr. Shannon’s client not only won the case but as far as I can see, every motion as well. He even held a hearing to sanction Mr. Shawe for, in part, reading his partner’s emails that were open and available on the company server – stating that the company privacy rules did not apply to her. Could this have been done as a means to make Shawe pay Elting’s outrageous buyout demands? For the record, as a few publications reported this week, Shawe offered her $300 million this week and if she declines or refuses to make a counter offer, this should tell any reasonable person which party wants to come to a settlement and which one is playing games?

While I have fervently criticized Chancellor Bouchard in the past, it seems he has truly gone off his mandate in this instance by ignoring evidence indicating the possibility of tampering, and intent to take down a company from within? Instead he has focused on intemperate emails between the two partners to dissolve a thriving and profitable company, while ignoring suspicious irregularities whereby there were, according to Phil Shawe’s defense team, serious breaches of fiduciary duty?

In case you haven’t seen the case, which I’ve written about twice in recent weeks, let me sum it up for you here: Bouchard’s Delaware Court of Chancery ordered the sale of a $500 million profitable translation business because one of the partners who has a very limited role at the company claimed there was a deadlock. The fact that the company has been and continues to make record profits makes this decision all the more disturbing because this has never happened before in the history of Delaware!

After reading the various papers in the court file it is very obvious in my opinion that Ms. Elting seems to be manufacturing deadlock and using the court to gain a payout she could never get if she sold her shares on the open market. So why is this a concern for the people and the great state of Delaware? Chancellor Bouchard is sending a message to corporate America that if you are having any squabbles at a board meeting then by incorporating in Delaware you risk the court selling your company out from under the rightful owners.

The decision was so outrageous that former New York Mayor Rudy Giuliani chimed in and has been strongly critical of the decision. Giuliani said, “it is unAmerican for the court to break up a thriving successful company just because two directors are having some disagreements.” The last thing Delaware needs with all of its other economic problems is a mass exodus by corporate America.

I applaud Giuliani’s efforts because someone needs to come to Delaware with a big broom and sweep out this mess. I said it before and I’ll say it again… the bottom line is that a very well politically connected lawyer who was appointed Chief Chancellor of the State of Delaware’s Chancery Court — even though he never served a single day on the bench, is in my opinion, making arbitrary decisions that seem to have no basis in law or fact. He apparently favors a single litigant (the plaintiff) whose attorney has a long-standing relationship with the Chancellor himself. This is indeed the appearance of an impropriety and most likely will be part of an appeal by Shawe’s legal team, if they so desire.

From my perspective, I believe it is no coincidence that Chancellor Bouchard either got this totally wrong, or is making sure “his” people are taken care of. Nothing could be more compelling than the dissatisfaction of more than 600 employees of TransPerfect themselves who took out two full page ads in the Delaware News Journal expressing their opinion that there was no dysfunction at TransPerfect and that the Chancellor’s decision will inevitably result in the loss of many jobs, if not the total downfall of this extremely successful business.

Chancellor Bouchard should know and care that people’s livelihoods are at stake and the corporate world is watching. This is his first big case, and it will not only define his career, but risks the future of Delaware as the state of choice for corporate America.

Link to Conference in New Orleans:

What Should Chancellor Bouchard Do?

Other News Stories on TransPerfect