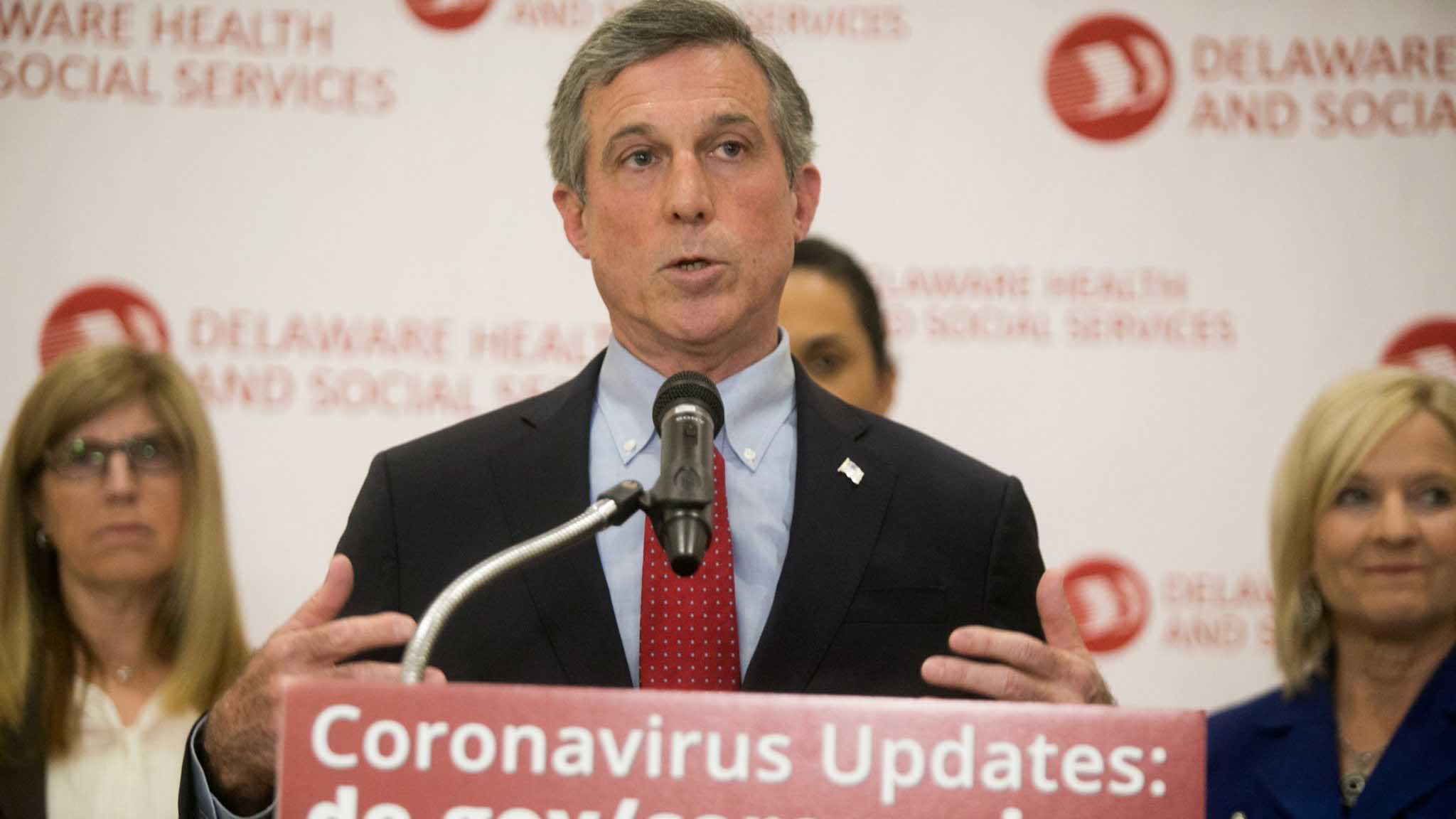 Nice guy, fun to talk with about sports, Governor John Carney (D) (from my perspective) is not a positive force in Delaware for many reasons. In my view, he has really missed the boat on reasonable re-openings of Sussex County beaches and businesses. Frankly, I was shocked at his dictatorial and authoritarian stance on his closing of Delaware and the police state that developed under his leadership. Ignoring the pleas from Republican legislators, Carney has wrongfully designated unfair and unreasonable restrictions on Delaware’s business community.

One thing that Carney failed to appreciate is that there are three very important weekends for beach businesses — Memorial Day Weekend, July 4th Weekend, and Labor Day Weekend. The people in Lewes, Rehoboth, Dewey, Bethany, and Fenwick were literally devastated by Carney’s absurd orders.

The financial hardship was devastating when they could not profit from Memorial Day Weekend. He ran a police state with harassment and threats from the authorities that could permanently destroy many struggling enterprises. Roadblocks with former Soviet Union type tactics with troopers following homeowners was beyond acceptable. Fishing charters were prohibited and ridiculous rules about swimming or sitting on the beach and having the boardwalk closed, were unreasonable prohibitions that were not necessary.

Carney’s failure to investigate the obvious appearances of impropriety in the Court of Chancery is, to me, a further indication of his lack of understanding of the importance of maintaining Delaware’s incorporation business. When you combine his lack of economic understanding with his apparent underestimation of the disconcerting riots in Dover and Wilmington, which further hurt business, are an indication of his leadership abilities.

This Governor is vulnerable and could lose if the Republicans can get it together!

A young vociferous activist named Seth Exter, who defied the ban on beach use, actually went down on the beach, planted a Trump flag in the sand, and went in the water. Recently he was quoted on Facebook as saying: “I told you so! ABC reports that the lockdown had no effect in stopping the spread of Covid19.” Exter was considering running for Governor!

Frankly, I believe John Carney would be a good coach, but as the Governor of Delaware — NO way!

Please read the article below about the strife and upsets that occurred.

As always your remarks are welcome and appreciated!

Delaware Gov. John Carney answers questions regarding Delaware’s response to coronavirus during a press briefing at the Carvel State Office building in Wilmington on April 3, 2020.

The complaints voiced in the two GOP letters reflect what has become growing disenchantment among some residents, business owners and politicians to Carney’s March 12 declaration of a State of Emergency in response to the coronavirus crisis. Thursday will mark 10 weeks that the emergency has been in effect.

“It is time to say, ‘Enough is enough.’ Your Phase One “reopening” of the Delaware economy is too little, and too late,’’ the letter from 15 state Senate and House members from Kent and Sussex counties wrote to Carney.
Among the moves the letter wants Carney to make:

· Move up the first phase of reopening statewide to Friday, the start of Memorial Day weekend, instead of his target date, June 1.

· Allow short-term rentals and stop blocking non-residents from coming to Delaware unless they quarantine for 14 days.

· Let churches, child care centers, youth sports and other activities return to normal.
· Audit hospitalizations and deaths in part because of “chatter in the medical community about deaths being classified as COVID-19 that perhaps should not be.”

“We urge you in the strongest possible terms to give people and business owners back their freedom and let them assume responsibility for themselves and their communities,’’ the lawmakers’ letter to Carney said.

The letter to Attorney General Barr was written by Sens. Brian Pettyjohn of Georgetown and David Wilson of Milford and Rep. Ruth Briggs King of Georgetown.
They contend that Carney’s emergency declaration and subsequent steps such as closing businesses, forcing visitors into quarantine and limiting public gatherings were “taken without legislative or judicial consent and without due process for the citizenry.”

One example they cited is Carney’s March 22 stay-at-home order except for work he deemed essential and shopping for necessary items such as groceries or medicine.
“This order strips the important constitutional rights of the citizens of Delaware,” amounts to “an unconstitutional restriction on travel liberties and imposes criminal penalties for actions not approved by the General Assembly.”

The letter charges that Carney “has usurped the authority’’ of citizens and Delaware’s legislative and judicial branches of government’’ and requests Barr’s “immediate attention to this broad, unconstitutional overreaching.”

Carney wouldn’t agree to an interview with WHYY about the letters, but criticized the one sent to him at his press briefing Tuesday.

Carney recently allowed non-essential retail businesses such as clothing and sporting goods stores to reopen with curbside service, and hair salons with strict sanitary guidelines and limitations. He’s permitting a limited reopening of beaches and boardwalks starting Friday for the holiday. Churches, which had been limited to gatherings of no more than 10 people, can open at 30 percent of capacity.
“I’m very disappointed in that letter,” the governor said. “It just sounds political. This is not a time for politics. This is a time when Delawareans pull together — Democrats, Republicans and independents … We’re a state of neighbors who treat one another like neighbors and we’re going to through this as neighbors.”
Carney said the letter contained “inaccuracies’’ he did not specify and noted that several Republicans did not sign it, “which tells me something in and of itself.’”
Nine of the 24 House and Senate Republicans did not sign the letter.
Republicans are in the minority of both chambers of the Delaware General Assembly and don’t hold a single statewide elective office in a state where registered Democrats far outnumber Republicans.

The governor derided the “divisive tone’’ and said he has been speaking regularly with many of the GOP lawmakers whose signatures are on it “and they never led me to believe’’ they objected so strenuously to his moves.

This is a situation like we’ve never experienced in our history,’’ Carney said. “It’s uncharted territory for all of us. We’ve tried to make decisions using the data and the science, to inform those decisions incorporating points of view across the spectrum.”

Carney spokesman Jonathan Starkey added that the GOP lawmakers “seem to be recommending the governor’s own strategy to him, saying he should be opening businesses as we can safely do so. That’s what the governor is doing. They know Delaware is implementing a ‘rolling reopening.’”

A grassroots group that unsuccessfully urged Carney to use state taxpayer dollars to provide financial relief for undocumented immigrants is now trying to raise money for them on their own.

Safe Communities Coalition says the Delaware Immigrant Fund is to support Delaware’s undocumented immigrants. The groups says there are 30,000 undocumented people living in the state.

Among other measures, the group wanted the governor to create a disaster relief fund to provide assistance to undocumented residents who are ineligible for unemployment insurance benefits and other relief including the CARES Act.
“We joined a few calls with the governor and Latino leaders and we left the conversations frustrated about his response. So we decided to get something started at the grassroots level and the response has been heartwarming,” coalition co-chair Dalissy Washington said.

Washington said Wednesday that since its inception a few days ago, the fund has received $12,567 from 99 donors. Business and philanthropic support is also being sought, she said.

Undocumented Delawareans will be eligible to apply for mini-grants of $100 to $1,000 to support basic needs. Those living in hard-hit Sussex County will get priority in the initial round of awards.

“What we have been hearing from immigrants working in the poultry industry in Sussex County is particularly alarming,” fund co-founder Erika Gutierrez said. “Some have shared about how scared they are to go to work. Others are sick but have to go to work to support their families. Something has to be done.”