Fairness delayed, but justice will prevail (for TransPerfect, and for Delaware)! 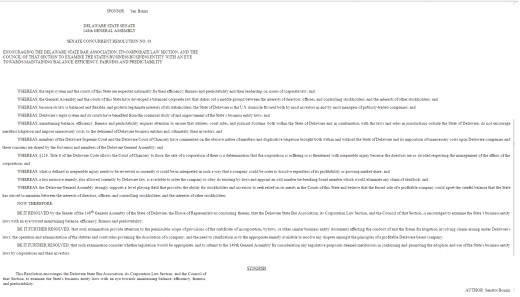 I Won’t Stop Telling the Story of this Travesty

The TransPerfect Global case going on in Delaware’s Court of Chancery has become a huge controversy, and it is not going to go away. Chief Chancellor Andre Bouchard, has in the wake of innumerable appearances of impropriety, made an arbitrary and capricious decision– forcing the sale of an extremely profitable company (putting thousands of jobs at risk).

I intend to exercise my first amendment rights on this issue until the legislature opens again in January 2017. The job of this Court is to administer Equity (Fairness). When there is the slightest possibility for fairness to not be properly administered, then something is wrong. This being said, why would anybody wish to incorporate in the State of Delaware, when the corporation could immediately and legally be at risk by potential Chancery Court action? Rhode Island and Nevada have competitive incentives for businesses to incorporate in their states. Delaware’s corporate franchise brings millions of dollars into its coffers.

When the possibility of losing that long- standing income stream becomes apparent, then it is time for legislators to act to protect Delaware and its citizens. According to Harvard Business Services owner Rick Bell (one of the world’s top Delaware incorporators), incorporations were down by almost 2% in Delaware in 2016. Has anybody noticed that Delaware’s economy is not exactly booming?

Senate Concurrent Resolution 91 was proposed and introduced by Senator Colin Bonini (R) to open discussion, and evaluate ways to legally make Delaware’s Chancery Court better. I give Senator Bonini tremendous credit for recognizing the importance of opening this dialogue. Although this harmless and positive resolution was not voted on by the Senate as this legislative session has ended until next January– no doubt a huge message has been sent. Next year, when there is more time, hopefully it will be voted on with bipartisan support in both houses of the Delaware legislature.

This has become a political issue now for the voters to consider when voting in future Delaware elections. Most of Delaware’s lawmakers are open-minded and willing to listen and I am hopeful that next year some changes in the mandate of the Chancery Court will be implemented. I have enclosed in the body of this email Senate Concurrent Resolution 91 for you to consider and evaluate. I think you will agree that it would be a positive step toward actual legislation. As always, your comments are welcome.

Because the matter deals with a member of the court and a local politician (yes, a judge is a politician too), when it looked like the issue was getting some attention and even some traction, the powers that be sought to silence the protest. This is an important matter and it needs to be addressed in an objective way.

How can a court ordering the sale of a functional and successful company because one owner wants more money than was initially agreed upon not impact other businesses that are incorporated or may incorporate in Delaware?

SENATE CONCURRENT RESOLUTION NO. 91 ENCOURAGING THE DELAWARE STATE BAR ASSOCIATION, ITS CORPORATE LAW SECTION, AND THE COUNCIL OF THAT SECTION TO EXAMINE THE STATE’S BUSINESS BUSINESS ENTITY WITH AN EYE TOWARDS MAINTAINING BALANCE, EFFICIENCY, | Source

The bill is online and HubPages does not allow duplicate content, even if repeating the bill’s text. So here is the summary and use the links above to read it in its entirety.

Encouraging the Delaware state bar association, its corporate law section, and the council of that section to examine the state’s business entity with an eye towards maintaining balance, efficiency, fairness and predictability.

This Resolution encourages the Delaware State Bar Association, its Corporation Law Section, and the Council of that Section, to examine the State’s business entity laws with an eye towards maintaining balance, efficiency, fairness, and predictability.

I have been a staunch defender of Delaware and this issue is lurking, and still too few are paying attention. We need to change the “who cares?” atmosphere.

Are you with me?