Skadden Up to Same Questionable Maneuvers in 2020 in Delaware as They Were in 2008 in New Jersey! 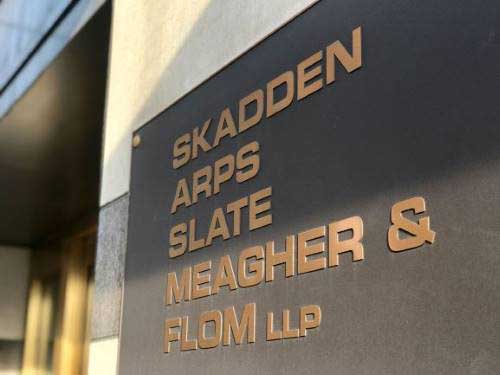 Please look at this story below from 2008. Does it sound familiar?! Skadden Arps seems to be grotesquely over-charging, just like they did in the TransPerfect case in Delaware, charging what amounted to millions of dollars in possible unjustified and undocumented fees, due to an apparent, cronyistic relationship.

Because of this law firm, the Delaware Chancery Court under Chancellor Andre Bouchard, and former Supreme Court Justice Leo Strine, who had his back, TrasnsPerfect has gone through hell. And, as I have mentioned in the past, Bouchard and Strine both worked together at Skadden Arps.

Redacted bills, no itemization of bills, lack of transparency all occurred in this old case in 2008. A dozen years later and the same suspicious behavior is, according to my sources, still going on from Skadden Arps in Delaware, as TransPerfect continues to deal with what is known as “The Delaware Way”– a wink and a nod and everybody gets rich from the Delaware Court of “Inequity” if you know the right people.

A friend passed this story along. Please read it and let me know what you think.

O’SCANLON, CASAGRANDE: GOVERNOR MUST EXPLAIN $548 PER HOUR LEGAL CONTRACT GIVEN TO SKADDEN ARPS

Senator Jennifer Beck and her Assembly colleagues Declan J. O’Scanlon and Caroline Casagrande, (R-12), called on Governor Corzine to explain the selection of Skadden, Arps, Slate, Meagher & Flom, one of the largest law firms in the world as lead counsel for his failed toll hike and borrowing scheme. As of four months ago, Skadden had billed the State more than $4 million, but Skadden has not yet billed the State for work over the past four months. No work product has been shared with the public and bills were redacted so it is not even clear what Skadden did for the money it was paid.

“Governor Corzine owes the people of this state a full accounting of this outrageous contract awarded in secrecy under a waiver from advertising for competition. This is yet one more sorry example of the Governor failing to disclose what he is doing with the public’s money, ” said Senator Beck.

* Under what authority was the contract offered considering the current budget providing a blank check for vendor services did not become law until five months after the contract was signed?

* Why was a $548 per hour contract agreed to which appears to be the most expensive hourly rate the State has ever agreed to pay?

* Why were there days when more than 30 lawyers at Skadden were all working on the matter and all billing $548 per hour for their work, with daily billings exceeding $75, 000.

“This Governor has promised transparency and it is time he lived up to it, ” commented O’Scanlon.

“This $548 per hour contract was awarded with special exceptions to advertising requirements, thereby limiting competition. I’m certain there were other firms capable of doing this work for less than $548 per hour, ” concluded Casagrande.