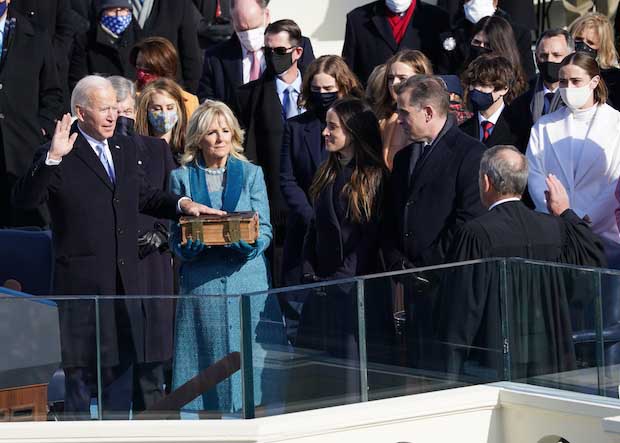 Yesterday, the swearing in of Joseph Biden as the 46th President of the United States, was for me an extremely sad day. I supported Donald Trump from the very beginning with my heart and soul. He did so much good for this country, it is still mind-boggling that he lost to an empty suit like Joe Biden

It should not have happened, but it did and now I am very concerned that the economy will eventually tank, our taxes will be increased, our borders will be open, our national security compromised, our freedoms will diminish, and hope for the future will be threatened. Biden indicated his agenda by immediately signing 15 executive orders – all hurting the American people – reversing many of Trump’s good operations and starting the march toward restrictive Socialism.

Folks, we are going to have a few years enveloped by hard times, especially if you are a conservative, which I am. Biden is without a doubt, one of the most corrupt politicians in US history. Everything about him is fake and from 1972 on, when he cheated in his first election by bribing the head of the teamsters union–Frank Sheeran–the man who killed Jimmy Hoffa, his betrayal of a good friend and adulterous behavior and lies in his marriage regarding Jill Stevenson–also suborned and supported by her, should all have prevented him from being President. His terrific and heinous portrayal of Curtis Dunn as a drunk driver when Biden’s first wife Nelia ran into his truck–100% her fault, yet Biden falsely claimed this good man was drunk to gain political sympathy when he was not at fault and had not been drinking! What kind of evil man does this?

Throughout Biden’s career there have been kickbacks, favors, and corruption that are mind-boggling. I am from Delaware and I know everything about this man. When you realize the depth of his corruption in peddling his office to China, Ukraine, and Russia for millions of dollars through the operation of his drug addict son Hunter, not only as a US Senator but as Vice President of the United States, proven by direct testimony of Hunter’s business partner and the validated laptop (now in the possession of the FBI) that belonged to Hunter Biden–exposing the kickbacks. Biden actually has run a long term crime operation benefiting not only himself, but his entire family. This is now your President of the United States whose apparent platform and that of the Progressives surrounding him is about moving this country into a Socialist society.

Realizing and knowing all of this with the strong belief that the overwhelming irregularities in the election played a huge part in Trump’s defeat make it ever harder to accept the results. Joe Biden will never be my President and I believe his administration will fail–showing the American people the huge mistake of electing him. Unfortunately, even after the defeat, Trump was in a perfect position to make a comeback in 2024, but right-wing radicals, induced and infiltrated by some Antifa members, chose to invade the Capitol Building and killed a police officer. Indeed, that horrible event destroyed and compromised our entire movement, hurt Trump’s future chances, got him impeached, and has made us suspect in the eyes of the world.

Furthermore, unrealistic lies and expectations, internet conspiracy theories, actually promoted by certain members of the GOP, future threats of violence and insurrection, will do us no good. It must stop, as it only hastens and allows more authoritarianism to develop. There is no way a violent take-over of the government will succeed and it will only result in death and incarceration.  If indeed such an event were successful, what then? Replacing one authoritarian government with another?

Indeed, I understand the frustration and the desire to fight back. Most of us feel that way inside, I sure as hell know how I feel about the whole situation, and indeed if things do get bad enough, and the left proceeds to take away our freedoms, that could develop into severe consequences for many people in the long run. Regardless, we have the opportunity to take back the House and Senate in 2022 and elect a Conservative President in 2024. In my opinion, a peaceful, well-organized operation starting now to target officials in order to win back our country is the way to go—it can be done.

The past 4 years have been interesting and I have made many new friends and yes lost some as well. So be it. My future purpose through the Coastal Network will be to promote Capitalism and conservative ideals, expose corruption, follow every aspect of the Biden administration, and work towards making America Great again! I don’t believe it can happen with the proposed agenda of Joe Biden and the Democrat controlled House and Senate, and I intend to work toward turning it back around through specific elections. We can do it.

One important thing to remember and indeed might be our only salvation are the powerful words printed on our currency, “IN GOD WE TRUST”.

As always, your feedback, is welcome and appreciated.