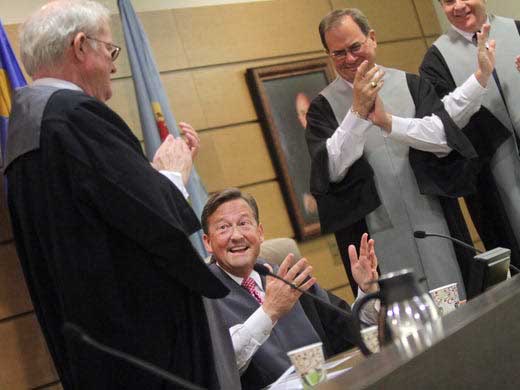 The media is once again doing their news spin, folks, in the Federal Judge ruling in the TransPerfect case, painting it as a win for Andre Bouchard. Yet if you read the Law.com story below, you’ll see it’s a huge victory for TransPerfect as the federal court found that Bouchard ordered the company to pay “$44 million in undocumented fees.”

Whoa, folks, $44 million in undocumented fees?! That’s highway robbery in broad daylight! The company’s victory will help others not get screwed or bullied the way TransPerfect did in Delaware by greedy, manipulative Bouchard. TransPerfect is lifting the veil for all to see against Bouchard’s crony-istic, secretive Star Chamber Chancery Court. This has been long overdue folks.

The ruling is a “clear admission of the inequity that was imposed upon TransPerfect and (its CEO) Shawe,” the company’s attorney said in the story. It also forced Bouchard to open his confidentiality order, which may have been ruled unconstitutional if he hadn’t. As Shawe himself put it, “It also put Bouchard and the Chancery Court on notice, which will help prevent future violations of civil rights.”

Read the story below for the details. Is it any wonder why Bouchard is fleeing? As always, your feedback is welcome and appreciated.

US Judge, Aiming to Avoid Conflict With State Case, Dismisses TransPerfect Claims Against Bouchard
U.S. District Judge Mark A. Kearney found the court didn’t have the jurisdiction over the constitutionality of a confidentiality order that’s no longer in place
By Ellen Bardash | April 14, 2021 at 05:38 PM
Chancellor Andre Bouchard of the Delaware Court of Chancery

A federal judge has dismissed TransPerfect’s claims against Chancellor Andre Bouchard, finding the U.S. District Court lacks jurisdiction and observing the potential for a federal declaration to interfere with pending state matters.
Judge Mark A. Kearney’s reasoning for dismissing the claims stemmed in large part from Bouchard’s decision to unseal billing documents.
Bouchard’s unsealing order, which came shortly after the lawsuit was filed, satisfied a key goal of the litigation begun by New York-based TransPerfect and its CEO, Phil Shawe.
Kearney’s decision followed a hearing at the end of March in which William T. Burke of Williams & Connolly argued on Bouchard’s behalf that the case was moot with state-level legal options available, while counsel for TransPerfect argued Bouchard’s handling of the fee petitions in the TransPerfect custodianship case in the Court of Chancery should be declared unconstitutional regardless.
TransPerfect and Shawe filed the federal suit alleging Bouchard’s order making billing records for a custodian confidential between November 2019 and January, when the order was lifted, violated their First and 14th Amendment rights.
Kearney found the court didn’t have the jurisdiction over the constitutionality of a confidentiality order that’s no longer in place, barring proof Bouchard is likely to reinstate the order. Without the claim moot and the ability to have an order make any actual change in the custodianship case no longer a possibility, any ruling on a First Amendment claim would be an advisory opinion only.
“So you may ask: no harm, no foul?” Kearney wrote. “The answer is yes at least in federal court relating to the First Amendment claim.”
The court found several reasons it was unlikely to assume Bouchard might reinstate confidentiality. First, the only unresolved issues in the custodianship case are those of the fees themselves, giving the court no clear reason to re-seal documents as the end of the case looms. Second, the window in which Bouchard could do so is narrow, as he’s scheduled to retire in less than a month.
As for the claim that TransPerfect and Shawe’s due process rights were violated, Kearney wrote the court couldn’t consider it either while the same issues are pending in the state court system. But unlike the First Amendment claim, he wrote, he disagreed with Bouchard’s counsel’s argument that the claim was moot.
“Our Court of Appeals instructs we should ‘not dismiss a case as moot,’ even if the nature of the injury changes during the lawsuit, if ‘secondary or collateral injuries survive after resolution of the primary injury,’” Kearney wrote. “Because we find such ‘secondary or collateral’ injuries asserted here, we decline to dismiss the due process challenges in the amended Complaint as moot.”
In total, Bouchard ordered TransPerfect to pay a $44.5 million in undocumented fees for custodian Robert Pincus, at the time with Skadden, Arps, Slate, Meagher & Flom, as well as $950,000 from an escrow account for Pincus’ work following TransPerfect’s sale’s closing.
“We consider the ruling a victory in that the Federal Court found Chancellor Bouchard ordered TransPerfect to pay ‘$44 million in undocumented fees’ to his former law firm,” Shawe said. “It also put Bouchard and the Chancery Court on notice, which will help prevent future violations of civil rights.”
TransPerfect maintains Bouchard’s rolling back the confidentiality order weeks after the federal suit was followed was done in an effort to eliminate the suit and that doing so served as an admission that the court didn’t have the authority to seal the documents in the first place.
“The Chancellor and his highly paid lawyers orchestrated the reversal of the offending order to game the system and avoid the finding of unconstitutionality in federal court,” said Martin Russo, Shawe’s lead counsel. “It is a clear admission of the inequity that was imposed upon TransPerfect and Mr. Shawe.”
Ryan Costa of the Delaware Department of Justice declined to comment on the case Wednesday.