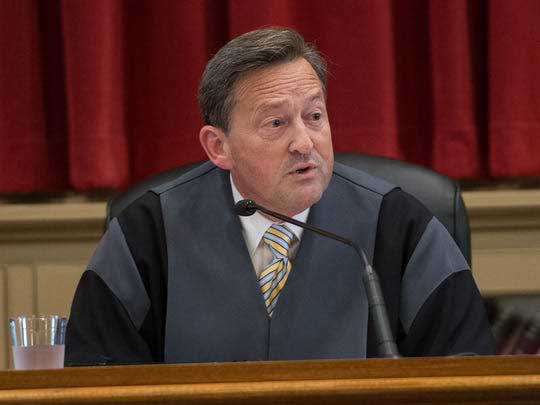 It has been over a month since Andre Bouchard ordered Skadden Arps to produce the bills in the TransPerfect case and at this juncture, I have learned that nothing has happened. No bills, no resolution, no information. Bouchard made this declaration, and nothing has been done by Skadden Arps as far as I know, and apparently more bills continue to be sent.

The fact that there have been no itemized bills to begin with, means that Chancellor Bouchard wasn’t doing his job, right?! You think at least the man who court-ordered that the bills be sent and itemized, the man who approves (rubber-stamps) them each month, would at least know what’s on these bills?!

Yet, NO ONE is doing anything about this. I’m the only one even talking or writing about this, as far as I know. Bouchard hands out judgments and decisions and orders, and of course he enforces them — the man is a judge, after all, he has the power — but in this ONE instance, nothing is happening?!

His former law firm is supposed to show the bills — again, by the Chancellor’s clear-cut order — and nothing happens, and yet he is OK with this?! How is this possible? Why isn’t Bouchard holding Skadden Arps and his former partner and appointed Custodian Robert Pincus in contempt of court as he did CEO Philip Shawe?

As I’m seeing this — and I don’t know how anyone can see it otherwise — Bouchard continues, in my opinion, to oversee some sort of money-train for his former law firm. It is apparent that these outrageous and absurd, $1,475 per hour bills, in my view, clearly indicate that former Skadden Arps employee Andre Bouchard is seemingly looking out for his Good Old Boys at his old law firm! Leo Strine, Bouchard and Pincus all worked at Skadden. Aren’t there more places to find lawyers in this state?

Folks, we are talking about $15 million in unitemized, unaccounted fees over the past few years. This is serious money and any reasonable person would expect these charges to be explained? It is the appearance of an impropriety !

How else can you explain it? Just to be sure I’m correct about this, I called a couple of employees in the accounting department to confirm that indeed the bills have not stopped coming in. So new bills are coming in, while the old bills have not been itemized or seen by the people paying the bills?! What gives, folks?! What gives!

It’s outrageous, Chancellor Andre Bouchard is providing no oversight on this. At least not to the public or the media from what I understand.

It is apparent to this investigative reporter, that since TransPerfect and its CEO Phil Shawe have had to fight to receive actual itemized bills, this must mean the court doesn’t have them?! Am I correct in my assumption? Bouchard is ordering one party to pay another — blindly, with no line-by-line explanation as to what work was done and why? Can you imagine?! What a crazy gravy-train of funds established here by Bouchard and his former firm!

It would be great to see the Delaware News Journal or Delaware Business Now or any other reporter or editor at a Delaware publication get to the bottom of this.

If any of you, my many readers, have any idea what’s going on here, please let me know if I’m missing something.

Either way, I’d love to hear your feedback on this.