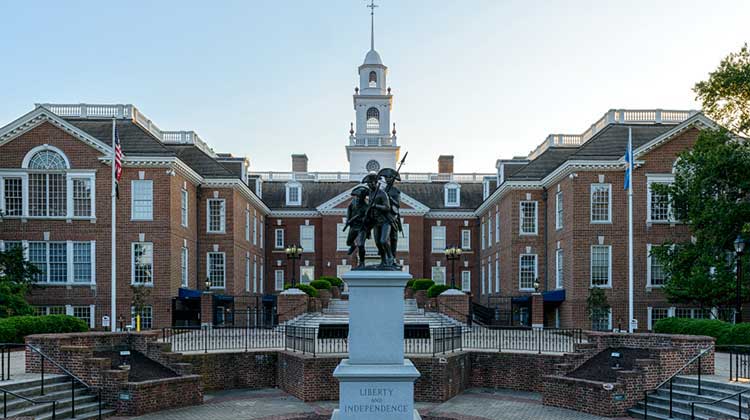 I remember the heydays in Delaware where the Republicans under Governors Pete DuPont and Mike Castle, created fantastic prosperity for the first state, leading the nation – always in the top 5 in economic development and first in judicial equity, having uniquely established the Delaware Court of Chancery as a place where real fairness and equity once existed with honor and respect. When both houses were controlled by the Republicans, the state was well into the black with a superbly-run system.

In my view, ever since the Democrats took over, beginning with Governor Ruth Ann Miner, Delaware began an economic decline that was typical of the disastrous instability and corruption in American cities nationwide. Democrat leadership has no sense of economic responsibility and always seems to ultimately create a financial disaster. Delaware is right in line with this typical mismanagement. The loss of the Chrysler plant in Newark, absolutely the responsibility of the insipid and dishonest, then US Senator Joe Biden, who talked the talk, but never walked the walk, created the beginning of Delaware’s downward spiral of corruption and loss of prosperity where only a few, white elites got the benefits, while the grotesquely fooled citizens of Delaware were continuously screwed until it was too late. It WAS and IS the “Delaware Way.”

“The Small Wonder” – beautiful Delaware, America’s First State, once a bastion of production is now 48th nationwide in economic development and 12th in judicial equity. There is only the Democrats to blame!

Current Democrat Governor John Carney has continued the unfriendly practices that have destroyed many of the small businesses throughout Delaware,which have been forced to close their doors, creating personal hardships for the owners, employees, and patrons, who no longer have the services. Many new businesses are no longer incorporating in Delaware and many are relocating elsewhere, because of Chancellor Andre Bouchard’s biased and subjective positions.

Carney’s authoritarian, police-state tactics have not endeared him to the voters. He condones and fuels a Chancery Court operating under a cloud of appearances of impropriety with Chancellor Bouchard at the helm, and, in my opinion, the corrupt “Delaware Way” continues with impunity. The system is in real need of change, but Carney seemingly has no interest.

“Citizens for Transparency and Inclusion PAC,” which has a million-dollars to fight with, is taking Governor Carney to task, claiming he supports racial inequality and is dragging Delaware into extreme economic decline.

Carney is vulnerable folks, and after the Delaware Primary on September 15th, the Republicans will decide who is going to attempt to defeat him. If that candidate runs the right kind of campaign, establishes a strong message, and raises enough capital to implement that message, Carney may well be defeated.

Please read the article below from “Business Wire” and send me your feedback which is always welcome and appreciated.

Since Governor Carney took office in 2016, Delaware’s Income Inequality Ratio has grown steadily, as the state has dropped 11 spots from 13th to 24th in the nation in the Talk Poverty Organization’s income inequality rankings, a precipitous decline.
Meanwhile, this week the New York Post and City Journal ran a scathing article highlighting Delaware’s decline and calling the economic health of the state “out of balance.” The article followed up on reports that in 2018, that while other states are seeing economic growth, Delaware is one of only two states where poverty is rising.

“Governor John Carney has fueled ‘The Delaware Way’ where a few elite and mostly white men stay in power while communities of color and low-income residents lose ground,” said Chris Coffey, spokesperson for Citizens for Transparency and Inclusion. “As we know well, a company can headquarter in Delaware, and then be at the mercy of an underhanded process where Andre Bouchard’s Chancery Court can charge companies millions to assign old colleagues new court fees. John Carney has presided over and encouraged this despicable behavior, all while claiming to support an economy that works for every resident.”

According to the National Assessment of Educational Progress (NAEP), just 31 percent of Delaware’s public school eighth-graders are deemed “proficient” or “advanced” in reading, and just 29 percent in math. Black students’ average scores in 2019 in the NAEP were 25 points lower than their white classmates.
“When it comes to Covid-19, economic health, and education, John Carney has failed Delaware’s most vulnerable residents time and time again,” continued Coffey. “The days of a small group of unaccountable elites ruling over Delaware and hoarding all its wealth on the backs of low-income workers and residents must come to an end. Delaware needs equity and an economy that works for all, which starts with voting Governor Carney out of office this fall.”