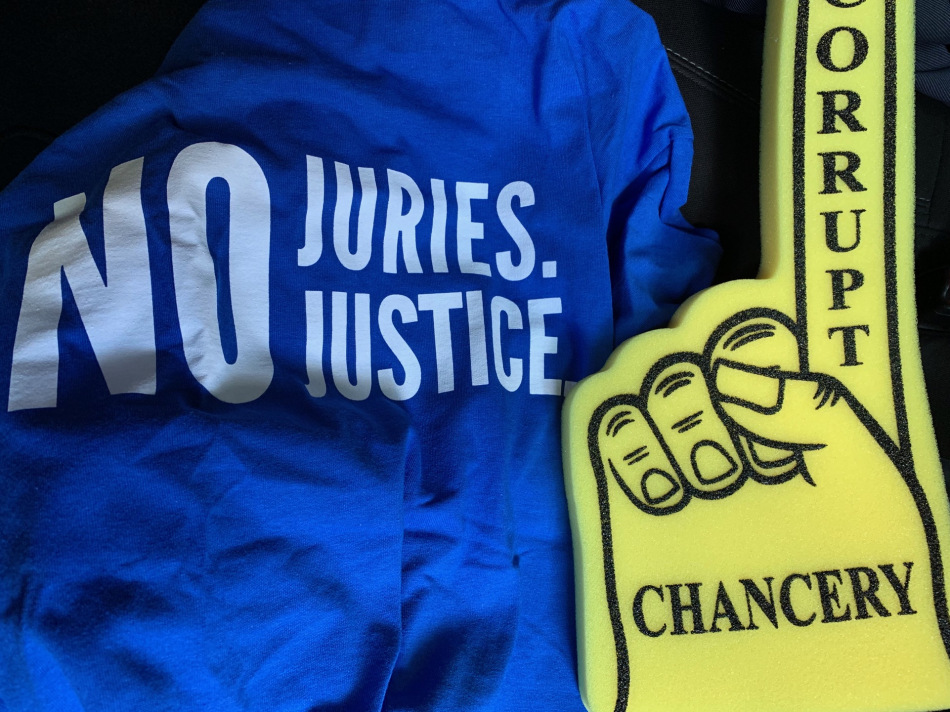 I had the unique experience of covering an unusual day for Delaware and the Coastal Network, on Wednesday, July 10, in Wilmington, Delaware. It involved a rousing and heavily attended press conference, a fascinating hearing in the Court of Chancery with Andre Bouchard presiding, and a fabulous party and TransPerfect summer celebration at the Hotel DuPont later that night.

The activities began about 12:30 PM with a Press Conference — in 90 degree heat that felt like 105 degrees with unbelievable humidity — in front of the Delaware Court of Chancery which was organized by the “Citizens for Pro Business Delaware.” This group, led by articulate activist Chris Coffey, has 2,700 members, made up of TransPerfect employees who were negatively impacted by Bouchard’s decisions along with other concerned Delaware citizens. The group now appears to be dedicated to making changes to modernize the controversial rules governing Delaware’s Chancery Court. Having covered the TransPerfect case for years, and Andre Bouchard for even longer, I was pleased to take the opportunity to observe all these players face off live and in person. During the press conference on the front lawn of the Chancery Court, yours truly, like a dummy, chose to wear a dark suit — and the Delaware establishment almost had their wish for my complete demise, as I was about to pass out from the heat.

Weather and wardrobe aside, I was extremely impressed with Coffey’s platform and passion. It is unquestionable that this group shares my desire for increased transparency in the Court of Chancery, as they are proposing much needed common sense reforms. In my opinion, the legislature cannot act quickly enough to decrease perceived (or actual) corruption surrounding the Court’s activities.

The obscene and disgraceful court-ordered looting of TransPerfect continues!!! Skadden Arps gets paid more in a month for secretive and undisclosed “legal services” than normal people make in a year. It appears to me that Skadden and the judges are truly modern day Pharaohs, living extravagantly off the sweat of the thousands of innocents. I believe without a doubt that these (potentially, colluding, former law partners, “Bouchard and Strine”, both Skadden alumni) are truly a biblical plague on Delaware’s reputation. During Bouchard’s tenure, our once-great state has dropped to a dismal 48th out of our 50 U.S. states in overall business confidence, and after 15 years as the undisputed #1 in business litigation, we fell to #11.

I challenged Coffey with the following direct question, “Sir, do you think the fact that Chancellor Bouchard engaged in “boondoggle”, travel excursions with one-side’s attorney during the decision-making phase of the TransPerfect case actually created a conflict of interest and an appearance of an impropriety?” Coffey’s answer was firm and unequivocal, “Absolutely-YES!”

Folks, for those of you that couldn’t hear Chris Coffey’s speech live, I am telling you his answer and his entire speech sounded statesman-like and remarkably credible. I believe this group represents the best chance Delaware has for reform, positive change, and a fresh start — but, they must defeat a well- off Bouchard and his establishment, “good old boys” club to get it done. Make no mistake, there will be a significant battle for Delaware’s; future playing out in the 2020 election! Buckle up!!!

I then observed the Chancery Court argument. Former TransPerfect co-CEO Elizabeth Elting’s attorneys (after Bouchard handed them a $400 million check) are arguing for another $200,000. With each side lawyered up, according to the TransPerfect employees I interviewed at the Court House, this hearing will cost over $500,000 for each litigant. What judge allows $1 million to be spent to argue over $200,000??? So again, I expect payola is responsible for why this Chancellor would even have this hearing at all. In my view, it might be because his lawyer buddies could bank yet another payday on the backs of the dedicated, TransPerfect employees. It’s shameful and disgraceful!!!

In a packed courtroom, with many TransPerfect employees who believe they are all victims of Bouchard’s corruption staring at the Chancellor, I had two observations worth mentioning that won’t be found in any other transcript:

1) Bouchard appeared judicial and didn’t even resort to his biased name-calling.

2) His best pal Kevin Shannon of Potter Anderson said ABSOLUTELY NOTHING and left via a secret exit to avoid my questioning.

If someone hadn’t seen Bouchard in action before this hearing, they may have mistaken him for actually being an ethical judge on this specific day. I guess when there are a courtroom full of antagonistic folks staring you down, it must engender self-reflection.

Like the many TransPerfect employees, I will wait for the ruling — but having seen Bouchard’s judicial antics for years, I’m not sure this subjective Judge will ever rule against his best buddy, Kevin Shannon, no matter what facts are presented.

Then the fun began with a huge TransPerfect party with a fancy sit-down dinner at the Hotel DuPont. At least 300 people packed the place to celebrate that TransPerfect had survived Bouchard’s “DISSOLUTION” order, and despite these trials and tribulations, is still doing quite well as a company. (Never did their revenue slow, not even during the case.) Besides TransPerfect employees, participants included concerned Delaware citizens, a great band, the winning legal team ( including Alan Dershowitz), Villanova basketball star Kris Jenkins, Super Bowl Champion Philadelphia Eagles tight end Brent Celek, Cindy Green – Registrar of Wills office in Sussex County, Delaware Senator Colin Bonini, Sam Waltz of The Delaware Business Times, and to top it all off, a great show by Saturday Night Live star Colin Jost.

TransPerfect CEO Philip Shawe gave a gracious speech, praising all of his employees for their dedication and loyalty. Without a doubt, this man has earned the love and respect of an army of people over his 27 years in business. No one should spend their whole life building a company, and have court corruption seize it and try to auction it off to a competitor. These employees were great, happy, and thankful to still have jobs. During the evening, it really hit home to me how much Bouchard’s obvious lies and defamatory name-calling must have hurt these families over the Chancery’s 5-year occupation of TransPerfect. Bouchard called these hard-working normal folks “Dysfunctional” — In my view, this grotesque misrepresentation, was made so he could take over the company and enrich his friends. Its just unacceptable!!!

Make no mistake folks, what happened to TransPerfect in Delaware wouldn’t even happen in Russia — it’s disgusting. Regardless, I saw a company on Wednesday night that had overcome perceived corruption, while keeping the American Dream alive for themselves, and hopefully for entrepreneurs all over the world. Delaware’s business future however, will be in the hands of our Elected Officials.

Lastly and on a personal note, it was gratifying for me, as I was actively acknowledged by the employees — many who felt they were silenced and oppressed by Chancellor Bouchard and Skadden Arps Custodian Bob Pincus. They felt that I have helped give them a voice through my reporting. I told them I am honored to shine a light on injustice and corruption, and that I will continue to do so for my readers.