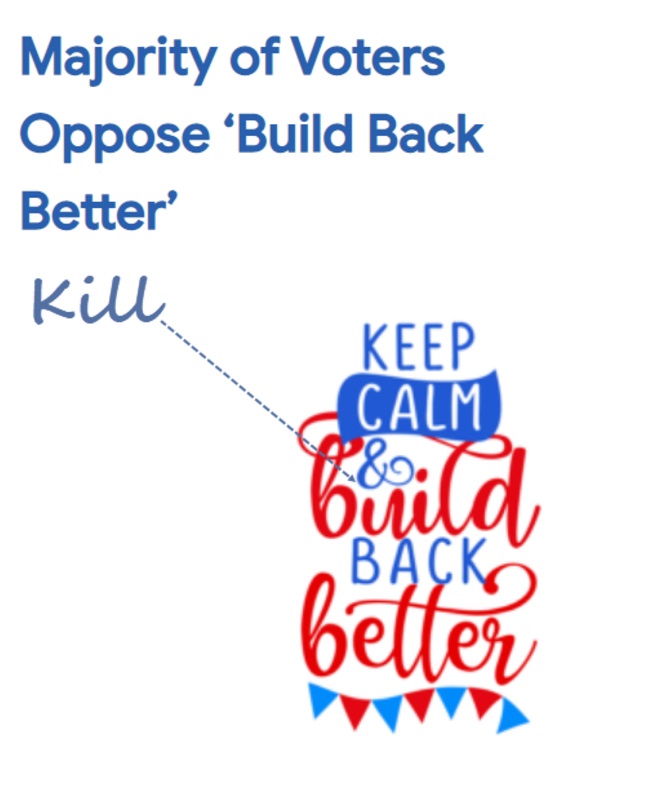 The Infrastructure Bill that was recently passed and signed into law by Joe Biden is one thing, and although filled with pork that has nothing to do with infrastructure, does at least address fixing up roads, bridges, airports, and so on.

However, the “Build Back Better Bill” that Biden is touting – and is now in the Senate – is a law that will completely break America, creating incessant inflation, beyond any speculation. The amount of money dedicated to the Green New Deal is staggering, basically destroying the U.S. oil production industry, with money for energy programs that only work when the wind blows or the sun shines, driving the cost of fuel and heating oil off the charts.

Folks, Biden has created situations that are dangerous for the future prosperity of all Americans. Shutting down pipelines, opening the Southern Border to millions of illegals, un-vetted, and unregulated. The new bill gives these people citizenship and also pays them. While veterans live on the street, illegal aliens are put up in hotels. The new bill creates an authoritarian situation where 87,000 IRS agents will be hired to investigate, to monitor, and to harass every American who deposits more than $10,000, which is many Americans. Basically, the bill weaponizes a government agency to control every aspect of your life. If this happens, your freedom and privacy will be gone.

Folks, Biden has become a complete Socialist and this horrible bill will seal our fate, putting America under a system that will absolutely destroy our country. If you do not want to be completely controlled and monitored by the government, tell your Senators to vote no on this premeditated, calculated, legislation that is designed to take away your freedom.