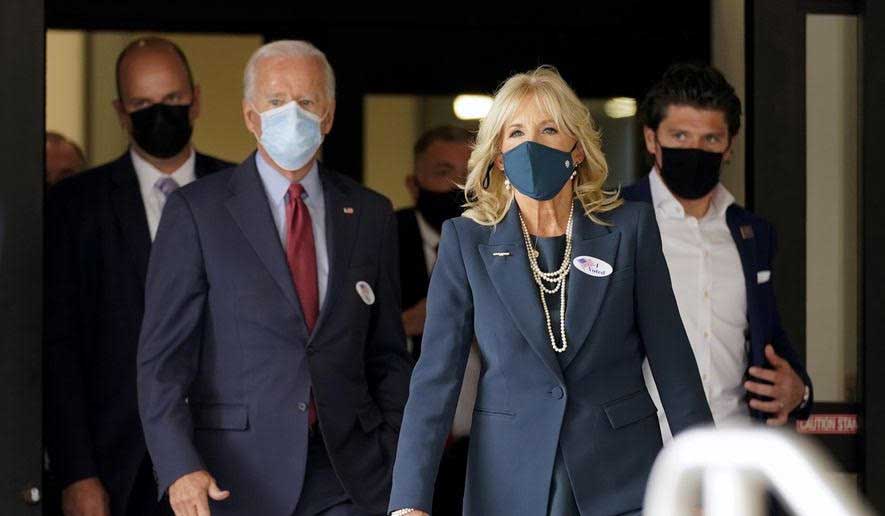 ARE THE BIDENS DELUSIONAL?? FROM THE VERY BEGINNING, HOW JOE AND JILL MET IS JUST ANOTHER LIE !

Folks, just days before the election, the Bidens have the audacity to put out another TV lie and political ad in the face of outed corruption! Bill Stevenson, Jill’s former husband tells the truth, but the Bidens are apparently so arrogant they think the American people are stupid. Joe and Jill Biden never met on the phony blind date that Jill prevaricates in her insipid book! ABSOLUITELY UNTRUE, which I have personally verified from other unimpeachable sources.

Folks, when you put together the entire Biden history of absolute falsehoods, the grotesque misrepresentations and political prevarications these people have perpetrated on the people of Delaware since 1972 and also the American people as a nation while selling his office to Communist China and also Russia, in my opinion, through his son Hunter, how can anybody logically justify voting for this serial criminal who apparently has bamboozled so many people?! Jill might be visiting Joe and Hunter at a federal prison after the election?! I wonder if they will be able to share the same cell?

Folks, there is no comparison as to the abilities, lifetime actions, and realities between President Donald Trump and the head of the “Biden Crime Family”, Democrat candidate for President of the United States, Joe Biden! The clear dishonesty of these people make them a threat to our national security. Please, vote for Donald Trump to guarantee future prosperity instead of devastating depression without hope created by people who think they are above the law.

Please scroll down to read the accurate article which is public news.

VOTE ON TUESDAY NOVEMBER 3rd for DONALD TRUMP like your life depends on it, because it does!

*Please check out the article below which should further outrage any reasonable citizen who has been lied to by Joe Biden’s lifetime of blatant dishonesty:

Bidens say they met in 1975; Bill Stevenson says they knew each other in 1972

A Biden campaign ad released this week features a timeline of when Jill Biden met Joseph R. Biden that has been disputed by her ex-husband.

In the one-minute ad, “In the Dark,” Mrs. Biden makes reference to the well-known account of how she met then-Sen. Biden in March 1975 after he saw her photo on a poster and got her phone number from his brother Frank.

“My name is Jill Biden, and I want to tell you about my husband Joe. I first met Joe two years after a car accident that injured his sons and killed his wife and his baby daughter,” says Mrs. Biden, referring to the December 1972 crash, in the ad released Tuesday.

Bill Stevenson, a prominent Delaware rock-venue owner who was married to Jill from 1970-76, has told media outlets that she met Mr. Biden during his 1972 campaign for Senate, before the accident, and that they later had an affair that broke up the Stevenson marriage.

The Biden campaign flatly denied the allegations after they surfaced in August, and accused Mr. Stevenson of seeking to drum up publicity for his upcoming autobiography.

“These claims are fictitious, seemingly to sell and promote a book,” a Biden spokesperson told “Inside Edition” in September. “The relationship of Joe and Jill Biden is well documented. Jill Biden separated from her first husband irreconcilably in the fall of 1974 and moved out of their marital home. Joe and Jill Biden had their first date in March of 1975, and they married in June of 1977.”

Mr. Stevenson, whose Stone Balloon bar featured top acts such as Bruce Springsteen and Metallica, told WDEL radio host Rick Jensen that the allegations went public when a writer interviewed him for a story about his still-unreleased autobiography.

“I said, ‘Look, the Bidens made up this dramatic story that they met, he saw a picture of her,’ and I told him, I said, ‘That was so untrue,’ ” Mr. Stevenson said in the Aug. 17 WDEL interview. “There’s probably 500 people in Delaware that saw Joe Biden and Jill at three major fundraising events at the Stone Balloon in 1972, after the Stone Balloon opened in February.”

Mr. Stevenson told the [U.K.] Daily Mail that he plans to vote for President Trump — he also supported President Barack Obama — but that he bears no ill will toward Mrs. Biden, adding that his book is “ready to go” and that “there’s nothing personal about Jill.”

“One thing I do not want to do, and I know this might sound funny to people, is that I don’t want to hurt her chances of becoming first lady of the United States. That’s not my goal,” Mr. Stevenson told WDEL.

He said he has not spoken to her about the book, but if he did, he would challenge her how-Joe-met-Jill account.

“I would say to Jill, listen, you know how I feel about this. You had an affair. You worked on the campaign,” Mr. Stevenson said. “Why you invented this crazy story on Oprah Winfrey about, he saw your picture in the train station — there’s too many people that knew we worked on his campaign in 1972.”

He said Jill would babysit for the widowed senator’s young sons, and that he grew suspicious when he was told Mr. Biden caused a fender-bender while driving her Corvette in 1974. The couple separated after a friend of hers told him about the affair in October 1974, Mr. Stevenson said.

The divorce became final in late 1976, and Jill and Joe exchanged vows soon after.

“Very shortly thereafter — I was paying her $2,000 a month at that time — when they got married, my lawyer called up and said, hey, she just got married, don’t send the next check,” Mr. Stevenson said. “That was in June of 1977.”

The Bidens, who married June 17, 1977, have given an entirely different account of how they met, saying that they went on their first date after he called her and persuaded her to cancel a previously scheduled date.

“My brother said, there’s this woman — you’ll really like her, Joe,” said Mr. Biden in a 2020 Democratic National Convention video. “So I gave her a call, and she had [another] date that night.”

Mrs. Biden jumped in with, “You said, do you think you can break your date? Well, I called and told the guy that I had a friend in from out of town, and went out with Joe.”

Mr. Stevenson, a member of the Delaware Rock & Roll Hall of Fame who also started and sold a transportation company, was listed as one of the 50 most influential Delawareans in the last 50 years in 2012 by Delaware Today, as was Mr. Biden.