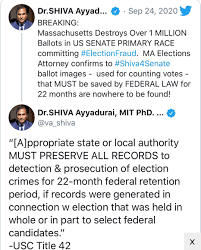 Dr. Shiva Ayyadurai, seen in this enlightening, “YouTube” video below, exposes in great detail the truth about our election system and the potential it has to be continuously compromised. Dr. Ayyadural is brilliant, accredited, and started many successful companies. It’s important to watch his video.
The results of this election must be reviewed and all claims of fraud heard. Our system must be fixed if our Republic is to survive. This Presidential election is different from any other election in U.S. history, due to accusations of voter fraud. Many Trump voters believe Biden has not legitimately won this election and that the vote tallies have been compromised.

Eyewitness testimony of ballots being changed, altered, or harvested, mail-in ballots coming in after the legal deadline, and software programs that changed votes from Trump to Biden are all being presented in lawsuits. Folks, the evidence is overwhelming that voter fraud occurred nationwide and every American should be outraged at the way it has been handled.

Please check out the attached video from YouTube and see what Dr. Ayyadurai says. He’s the inventor of Email, holds 4 degrees from MIT, a Fulbright Scholar. Indeed an impressive guy! Let me know what you think.
Respectfully Yours,

Press Release:
Dr. SHIVA LIVE MIT Ph.D. Analysis of Michigan Votes Reveals Unfortunate Truth of U S Voting Systems
Dr. Shiva Ayyadurai, the Inventor of Email, holds 4 degrees from MIT, is a Fulbright Scholar, and has started 7 successful hi-tech companies including EchoMail, CytoSolve and Systems Health. He is currently the Founder and CEO of CytoSolve, Inc., which is discovering cures for major diseases from Pancreatic Cancer to Alzheimer’s. He is also the Founder of Center for Integrative Systems that is the home of Innovation Corps and C.L.E.A.N./R.A.W. certifications. “On my 7th birthday, in 1970, I left India and came to America: to this land of incredible opportunity. As a kid, I learned from my parents, teachers, coaches, and friends that what mattered most was Truth — to uncover it, share it and fight for it. That core value is THE foundation of the America Dream. And my life has been about fighting for Truth, at every step.” “I have lived the American Dream. I grew up playing baseball, playing soccer, having a paper route, while running my own small lawn mowing and snow shoveling businesses as a kid. Being selected by American Legion Boys State to represent my high school, and later being awarded a U.S. Fulbright Scholarship were all part of this incredible journey. What an honor to be in the state of Massachusetts — the home of the Red Sox, Patriots, Bruins and Celtics!”