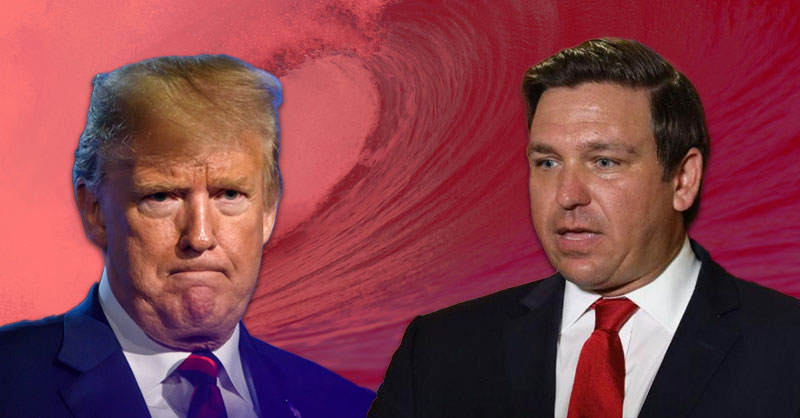 As we wait for the final results of the Midterm elections from the incompetent officials in Arizona, there have been, in my view, disturbing statements (obviously politically motivated) by former President Donald Trump against The Governor of Florida, Ron DeSantis.

This diatribe by Trump against Governor DeSantis, in the wake of certain conservative pundits, saying the poor Republican showing was partially caused by Trump, has really upset this patriot. Nobody supported Trump with innumerable hours of work, money, and dedication than I have. I also admire and support Florida’s Governor DeSantis who has done nothing wrong and is the best governor in the United States. Do I think Trump was totally responsible for the red wave that did not happen, no I do not. Most likely the abortion issue was the reason.

Trump obviously plans to run for President again and considers DeSantis a threat to his chances in capturing the nomination, as DeSantis created a true Red Wave in Florida and we the people love him. For me, it is like having two close friends, both whom I admire, and one who showed a flaw that is hard to accept and has created, in my mind, a serious and devastating political debacle that will most likely backfire. It unfortunately shows a flaw in Trump’s character, which to me is untenable. I am so disappointed in Donald Trump who created the best platform in my lifetime. To attack DeSantis was the worst thing he could have possibly done and will divide the Republican party, which could end up a disaster for future victories and give the Democrats the ability to continue their devastation of our country.

I once dated a very attractive and bright woman who worked closely for Trump for many years. She told me he was a genius, extremely creative, and effective in his business operations. She said he treated her very well and never hit on her, However, she also said that periodically, he demonstrated the emotional stability of a 12-year-old and sometimes acted like an egomaniac. Her comments didn’t at the time resonate with me and indeed I was all-in for Donald Trump when he ran for President and I was terribly upset when he lost to Biden who is incompetent, malicious, and dishonest. Indeed, Biden is the worst President in United States history.

At this point, all things considered, I hope Trump does not run, and if it is between DeSantis or Trump, I would have to support DeSantis who clearly has a great platform like Trump’s, but without the baggage. Trump has, in my view, made a huge political mistake, which will hurt him and also divide the GOP.

It is hard for me to say these things, yet that is the way I see it. As always, your comments are welcome and appreciated.