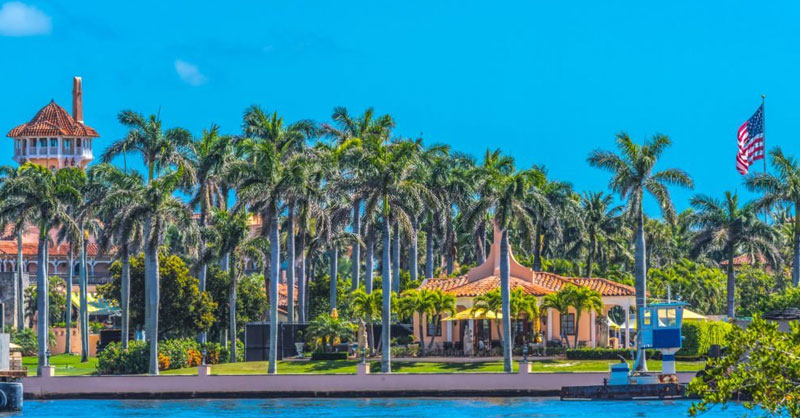 The unprecedented raid on former President Donald Trump’s Mar-A-Lago home in Palm Beach, Florida, roughly about 3 miles from my condo, has literally rocked the nation. Locally, the situation is on everybody’s lips and the constant topic of conversation. Some of the people are joyful and others appalled.

Folks, this is an extremely frightening development, as it appears the FBI and the DOJ have been weaponized by AG Garland to attack Donald Trump–the political opponent of Joe Biden and very possibly the next Republican candidate for President of the United States in 2024. The authoritarian/ Orwellian agenda of the Socialist Democrat Party and President Joe Biden is to subjugate the American people into indefinite mediocrity and to control every aspect of our lives. This can only be enforced by a secret police organization and that apparently is what is happening with the FBI. If this can be done to a former President, it can be done to anybody!

When I combine the absurd, one sided January 6th hearings led by the Vice Chair, Liz Cheney, the hate filled Republican Congress Woman who neglected her state of Wyoming in her dedicated quest to prevent Trump from running for President again, with this Mar-A-Lago debacle, I clearly recognize the evil genius of the Democrats.

The only good thing is Cheney got her walking papers and was defeated in the Wyoming primary by 40 points. The major concern for me and those of us who constantly monitor this stuff is that the original, predicted red wave could now be in jeopardy? Everything is about TRUMP, TRUMP, TRUMP, and how bad he is, and I am concerned, the worst administration in US history, that has killed our economy by destroying our oil industry, increased inflation to dangerous levels, opened our borders to millions of illegals, and compromised and corrupted our military to deal with China, is going to be able to continue its destruction of America. The police state that will eventually come could become a reality if the Democrats are still in power after the November elections?

Right now, because of the Democrat’s evil genius and constant harassment of Trump which is seemingly supported by the press, the Republicans are now down by 4% from taking back the Congress. The American people don’t know what is really going on and have no clue how bad it could get if that happens! Folks we could lose our freedom and any chance of prosperity. That is the absolute bottom line!

The latest development is that the Federal Judge, who signed the original warrant, has ordered the affidavit, which explains the probable cause for the warrant to be able to raid Mar-A-Lago, be made public; however the DOJ may redact informative parts of the document to protect informants and certain sensitive aspects of the procedure. This may or may not be helpful to the Trump defense.

Regardless, the GOP leadership had better concentrate on providing the American people with the truth about the Democrat agenda and how bad things really are and how bad things are going to get, if indeed the Republicans do not prevail in November! The polls indicate that if the election were held today, the Democrats will maintain control of Congress.

Frankly, I wish Trump, as much as I loved his platform, would not run now, all things considered, and Governor DeSantis, America’s best Governor here in the great State of Florida, take the helm as our future leader. Then we Republicans can concentrate on messaging the need to win back the congress in November. I do my best to get out the message of this fervent need for change, with my limited sphere of influence through the more than 20,000 followers on the Coastal Network, but without your help, I am deeply concerned that this Socialist, authoritarian government will prevail and destroy our freedom.

Folks, as things stand today, we are in a true and present danger of losing our county to a nefarious Democrat agenda. God help us if that happens !

As always, your feedback is welcome and appreciated, so please let me know what you think.