Hunter Biden claims to be friends with Chancellor Bouchard. You can tell a lot about a Judge by his Friends 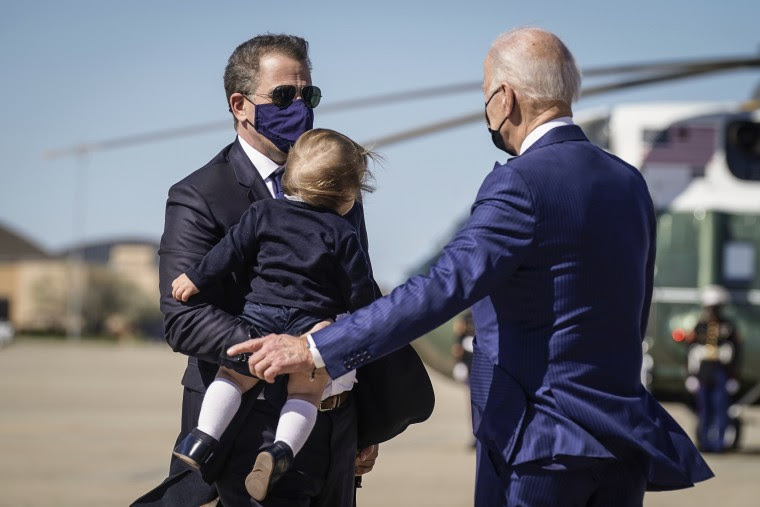 During negotiations, Hunter Biden threatened business associates with his ability to control outcomes in Delaware Chancery Court. At the time of his email, he says he is personal friends with all the Chancellors, and that he can automatically win there because of who he knows. Of course, the timing of Hunter’s emails which are under scrutiny tracks precisely with Bouchard’s tenure as Chief Chancellor. Coincidence? Seems unlikely.

Please check out this NBC News article. As always, your feedback is appreciated.

The hard drive and documents from Senate Republicans indicate few of Biden’s deals ever came to fruition and shed light on how fast he was spending his money.
May 19, 2022, 4:29 AM EDT
By Tom Winter, Sarah Fitzpatrick, Chloe Atkins and Laura Strickler

From 2013 through 2018 Hunter Biden and his company brought in about $11 million via his roles as an attorney and a board member with a Ukrainian firm accused of bribery and his work with a Chinese businessman now accused of fraud, according to an NBC News analysis of a copy of Biden’s hard drive and iCloud account and documents released by Republicans on two Senate committees.

The documents and the analysis, which don’t show what he did to earn millions from his Chinese partners, raise questions about national security, business ethics and potential legal exposure. In December 2020, Biden acknowledged in a statement that he was the subject of a federal investigation into his taxes. NBC News was first to report that an ex-business partner had warned Biden he should amend his tax returns to disclose $400,000 in income from the Ukrainian firm, Burisma. GOP congressional sources also say that if Republicans take back the House this fall, they’ll demand more documents and probe whether any of Biden’s income went to his father, President Joe Biden.

“No government ethics rules apply to him,” said Walter Shaub, a former director of the U.S. Office of Government Ethics who is now an ethics expert with the Project on Government Oversight. Shaub added, however, that “it’s imperative that no one at DOJ and no one at the White House interfere with the criminal investigation in Delaware.” Shaub had previously raised questions about Hunter Biden’s new line of work, selling his own paintings, which created the potential to purchase a painting to buy perceived influence, and also because the White House became involved in the transactions, arranging that none of the buyers’ names be known to Biden, the White House or the public.

Frank Figliuzzi, the FBI’s former assistant director for counterintelligence, said there is a national security risk when foreign powers like China see an opportunity to get close to someone like Biden. “It’s all about access and influence, and if you can compromise someone with both access and influence, that’s even better,” said Figliuzzi, now an NBC News contributor. “Better still if that target has already compromised himself.”

The documents and the analysis indicate that few of Biden’s deals ever came to fruition and shed light on how fast he was spending his money. Expenditures compiled on his hard drive show he spent more than $200,000 per month from October 2017 through February 2018 on luxury hotel rooms, Porsche payments, dental work and cash withdrawals.

Biden has admitted to burning through cash to pay for drugs and partying with strangers who routinely stole from him, and he struggled to pay multiple mortgages or keep up with alimony and child support payments to his ex-wife. In his autobiography, “Beautiful Things,” he says the money from Burisma “turned into a major enabler during my steepest skid into addiction” and “hounded me to spend recklessly, dangerously, destructively. Humiliatingly. So I did.”

In a February 2017 divorce filing, an attorney for Biden’s ex-wife said the couple’s outstanding debts were “shocking and overwhelming” and that they owed $313,000 in back taxes. According to the filing, they had bounced checks to their housekeeper and owed money to doctors and therapists. The filing alleged that Hunter Biden had spent copiously on drugs, strip clubs, prostitutes and girlfriends “while leaving the family with no money to pay legitimate bills.”

A representative for Biden says all of his tax responsibilities to the IRS are now satisfied. Two sources familiar with the matter have confirmed to NBC News that Hollywood attorney Kevin Morris began advising Biden in 2020 and arranged to pay off the approximately $2 million Biden owed the IRS.

Legal experts say, however, that paying the bill won’t relieve Biden of criminal liability or necessarily erase his debts.

NBC News analyst Chuck Rosenberg, a former Justice Department official, said that Biden’s paying what he owes could even be seen as an admission of criminal violations. Not paying taxes for many years, rather than one or two, Rosenberg said, helps establish intent, which can otherwise be a struggle for prosecutors in white-collar cases.

Paying the bill, Rosenberg said, might help Biden if he faced sentencing and “mitigate some of the damage, but it doesn’t undo the crime. That would be like returning money to a bank that you robbed. You still robbed the bank.”

NBC News obtained a copy of Biden’s laptop hard drive from a representative of Rudy Giuliani and examined Biden’s business dealings from 2013 to 2018 based on the information available on the hard drive and the scope of the documents released by the Senate.

The Republicans on the Senate Finance and Homeland Security committees, then chaired by Chuck Grassley of Iowa and Ron Johnson of Wisconsin, respectively, issued their first report on Biden’s business dealings in September 2020. The 87-page report said Biden had “cashed in” on his name, but Johnson said in an interview before its release that the report included “no massive smoking guns.”

Now in the minority, the Republicans from the two committees are still reviewing and analyzing several hundred pages of financial and business documents tied to Biden and his business associates, according to a person familiar with the committee’s work.

Biden has denied any illegal activity, and he told CBS News in an interview that he is “cooperating completely” with the federal investigation in Delaware. “And I’m absolutely certain, 100 percent certain,” he said, “that at the end of the investigation, I will be cleared of any wrongdoing.”

Biden made $5.8 million, more than half his total earnings from 2013 to 2018, from two deals with Chinese business interests.

Biden’s most lucrative business relationship was acting as a consultant in a project with a company that belongs to a once-powerful Chinese businessman who is now thought to be detained in his homeland.

According to business records referred to in the Senate report, Hudson West III, a venture funded by the Chinese oil and natural gas company CEFC and its chairman, Ye Jianming, paid $4,790,375.25 to Owasco P.C. over about one year.

President Joe Biden talks with his son Hunter Biden, who is holding the president’s grandson Beau Biden, as they walk to board Air Force One at Andrews Air Force Base, Md., on March 26, 2021.Patrick Semansky / AP fileFilings with the Washington, D.C., government show Owasco P.C. is controlled by Hunter Biden.

A review of the personal and corporate emails on Biden’s hard drive yield little information about any business he conducted on behalf of Hudson West III, and his autobiography doesn’t discuss his Chinese business dealings in any detail.

One of the few potential business opportunities discussed appears in a series of email exchanges among Biden, several U.S. partners and Chinese individuals associated with Hudson West III.

They talked about a potential gas deal on Monkey Island in Louisiana in 2017, but it appears no deal was made, and no publicly available documents indicate any sort of purchase, sale or agreement.