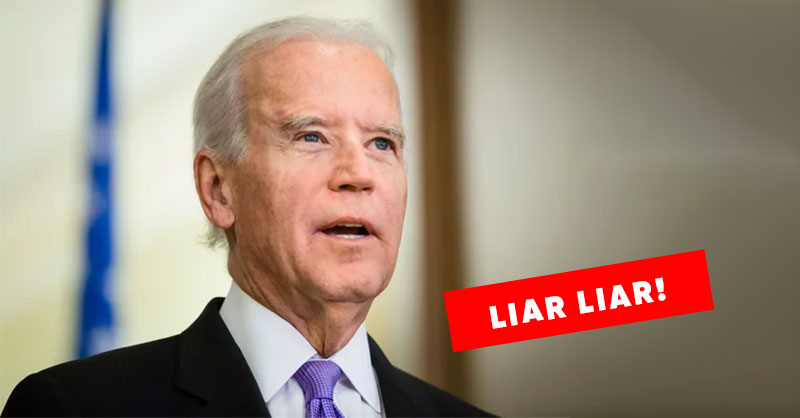 ”Liar, Liar, Pants on Fire”… the old adage that without a doubt identifies the biggest hypocrite, liar and exaggerator in the whole world. This insidious prevaricator is President Joe Biden. It is indeed a terrible thing to have someone who is so completely dishonest in charge of your country, using his position and power for his own benefit, while compromising your constitutional rights, freedom, and future prosperity.

Folks, I am from Delaware-born and raised, and I have been observing the unbelievable phenomenon of Joseph Biden all my life. I played football against him, ran a campaign against him in Sussex County, and have completed hours of opposition research on this man’s fallacious existence. It wouldn’t surprise me if I know more about him than he knows about himself.

Biden has been coddled, protected, and propped up by the media and hundreds of Democrat operatives who have basked in Biden’s amazing, reflected glory, in a career that is so filled with intrinsically evil operations and misrepresentations, within both the public and private sectors, that any educated individual who knows the reality of his existence is truly appalled.

Folks, this man should never have been President of the United States. As a local Delaware politician, Biden always had “the gift of gab”, a remarkable charisma that enabled him to propagate and enable a career of deception that Delawareans and eventually the Democrat hierarchy bought into, enabling him to achieve the highest office in the land.

From the very beginning, when Biden stole his original election in Delaware for U.S. Senator by bribing the head of the Teamsters Union, a career of deception, lies and criminal activity, has been propagated ever since. The Teamster’s President was bribed for $3,000, the Delaware newspapers endorsing Biden’s opponent were never delivered and Biden narrowly won his original election. Folks, I know the man who put up the money—from his lips to mine.

He lied about his grades and degrees in college. He was suspended for plagiarizing a paper in law school, and in a previous run for President, plagiarized a British orator’s words and was forced to end his campaign. He once said he was arrested with Nelson Mandela—a complete lie. He even lied about his marriage to Jill and how they met. There has been one prevarication after another, and yet Biden always got away with it, protected by the “apple, polishing, wart healing” media along with innumerable Delaware sycophants.

Remember the scandal of democrat aid, Tara Reid, who claimed Biden molested her? That situation was nicely covered up by the press, as I see it. Biden should have been arrested and thrown in jail. The influence peddling with help from son Hunter and the apparent millions of dollars gleaned by the entire Biden family is unprecedented. “TEN PERCENT FOR THE BIG GUY”. How do they get away with it? One Biden brother called it “Feasible Deniability”. The evidence found on Hunter’s laptop and testimony from former business partners indicates that our president has been involved in activities that have compromised our national security.

Biden continues to lie to the American people about everything—the compromised Southern border, the energy crisis, the economy, inflation, and every aspect of our society, which is absolutely under serious attack. Biden’s cloaked dishonesty, enhanced by a Democrat party that intends to subjugate us by weaponizing the DOJ, the IRS, and the FBI is beyond disconcerting and frightening. In my opinion, folks, it is hard for this writer to believe how this incredible con-man, named Joe Biden, was able to get himself elected President of the United States and how in two short years has managed to completely disrupt our nation.

Folks, on November 8th, we have the opportunity to control and eventually eliminate the abomination that Joe Biden has become by voting Republican. Indeed my words are harsh, but that is the way I see it.

This is my opinion based on my years of political experience and extensive observations of Biden’s method of operation. The facts are available to those who wish to do the research. As always, your feedback is welcome and appreciated.