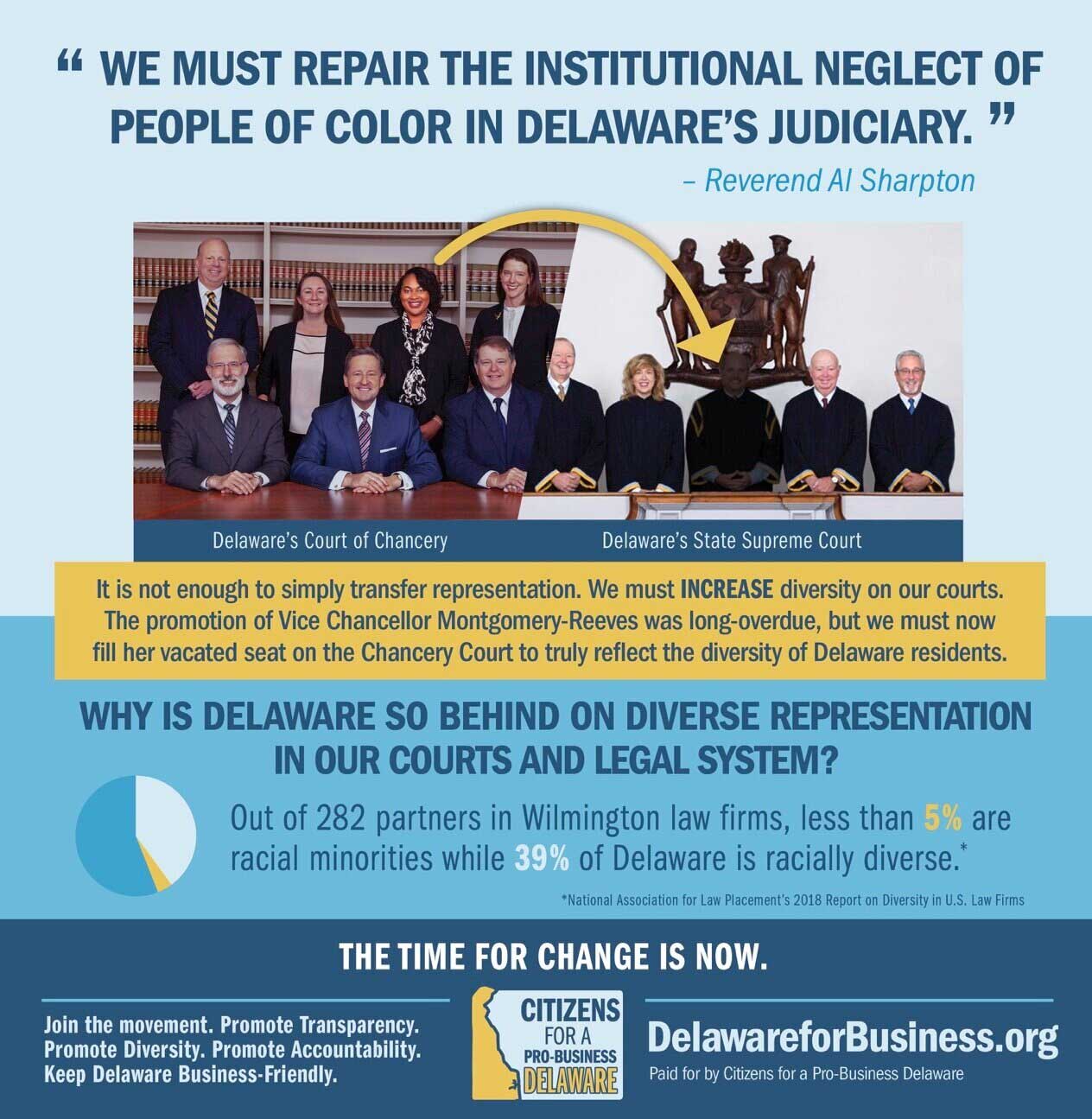 The history books will never give TransPerfect employees credit, but make no mistake, they took on, what I consider, blatant corruption in Andre Bouchard’s Chancery Court, and have successfully driven change. In my view, without the tenacity of TransPerfect workers, the Chancery and most of the Delaware judiciary would have remained all-white for years, perhaps decades. TransPerfect employees deserve 100% of the credit for integrating the Delaware court system from a racial and gender perspective.

C.J. Seitz’s now officially recognizes the problem. Coincidence? Or did the screams of Bouchard’s victims and their families become too much to bear… I think the latter.

Furthermore. I hate to break this news everyone, but cases in Chancery in front of Bouchard were decided by who Bouchard’s elite political friends were – including his Selenium prep school buddies, as I understand it based on my research. Cases were not decided on the witnesses, the testimony, or the evidence during his entire reign and the evidence is overwhelming, as I see it.

This illegal back scratching was bound to end someday, but the powers that be eventually heard the cries of TransPerfect’s oppressed workforce, and Chancellor’s ouster ensued.

Chancellor Andre Bouchard was the quintessential reverse Robin Hood, stealing from the poor, and lavishly bestowing riches upon his elite circle of socialites. How powerful was Bouchard? Powerful enough to be protested by minority workers all day in front of the Court House, with a giant Inflatable Rat named “Douchard,” – and according to my sources – he was so powerful that he personally got all media coverage of the protest blacked out – and hidden from the public.

Is there any American that believes a powerful judge of questionable ethics should have veto power over what the News Journal prints? It’s disgusting and un-American.

Seitz just announced a diversity project, to review racism in Chancery and other courts?

Enjoy this past Sunday’s ad and the full article below.

As always, your feedback is welcome.

This project, launched in collaboration with the National Center for State Courts (NCSC) and AccessLex Institute, will be led by a steering committee composed of judicial officers, individuals, and organizations working to build and sustain a more diverse Delaware bench and bar.

The Project is the first of its kind strategic effort to address diversity issues in the legal field, a release stated.

The project will make recommendations that will help attract and retain diverse members to the Delaware Bench and Bar.

“The National Center for State Courts and AccessLex Institute are committing their formidable experience, expertise, and resources to support our project. These organizations have been at the forefront of helping state courts and bars study diversity issues and recommend meaningful steps to address the lack of diversity in the legal profession,” Delaware Supreme Court Chief Justice Seitz stated.

Founded in 1971 by the Conference of Chief Justices (CCJ), NCSC is the organization that people turn to for authoritative services, knowledge, and information regarding the state courts and their operations. Headquartered in West Chester, Pennsylvania, AccessLex Institute is a nonprofit member organization composed of the nearly 200 American Bar Association-approved nonprofit and state-affiliated law schools.

AccessLex has knowledge and understanding of the diversity issues facing law schools and the legal community. AccessLex has been instrumental in helping states and other entities develop pipelines and other initiatives to support aspiring lawyers and law students in becoming licensed members of the legal profession, a release noted.

Seitz continued: “With Supreme Court Justice Tamika Montgomery-Reeves as a co-chair, we are going to study diversity issues in the Delaware legal community from top to bottom. We need to ensure the public is being served by a high-quality legal profession that reflects the diversity of our society. I recognize it will take some time. But we’re excited to get started. I know our effort will make Delaware a national leader in tackling diversity issues and bring us closer to the goal of a diverse and welcoming legal community in the First State.”

Gov. John Carney recently came under fire from a group known as Citizens for a Pro-Business Delaware for not nominating a black member to the Court of Chancery after Vice Chancellor Montgomery-Reeves moved to the high court.
Citizens is a group tied to TransPerfect, a company that went through a dispute over ownership in Chancery Court.