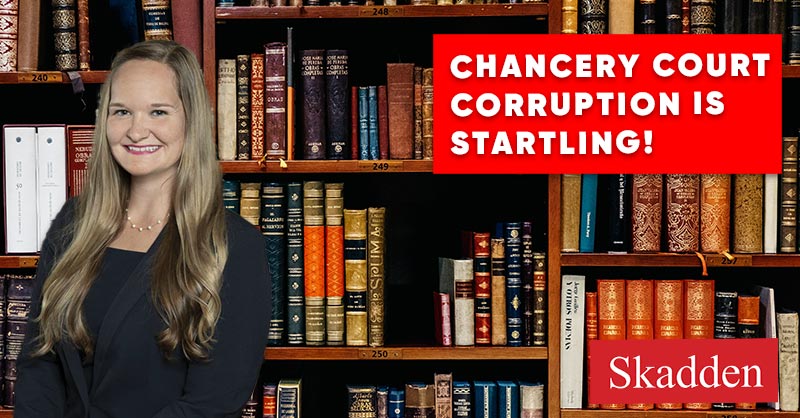 Shamelessly, once again, the Delaware Chancery Court appoints someone from law firm Skadden Arps for one of the few roles on the court. Why is Skadden the feeder firm at the highest equity court in the land? From my view, the corruption is startling.

There have to be consequences for more of the same, which will lead to more of the same cronyism and Good Ole Boy wheeling and dealing as this court keeps everything in-house and keeps bringing in more from Skadden.

See the Law.com story below and send in your feedback on this folks. It’s always appreciated.

Meet the Newest Master in Delaware’s Court of Chancery

With the addition of Bonnie W. David, formerly counsel for Skadden, Arps, Slate, Meagher & Flom’s Wilmington office, the business court has its largest complement of personnel in its history.

Bonnie W. David began serving as a master in Chancery on Tuesday, rounding out what’s now the largest Chancery bench in Delaware history.

With David, formerly counsel for Skadden, Arps, Slate, Meagher & Flom’s Wilmington office, onboard, all 10 positions on the Court of Chancery are now filled. With the addition of Loren Mitchell, previously a deputy attorney general for the Delaware Department of Justice, as a third master in Chancery in December, the court now has more judicial officers than ever before in an effort to accommodate growing caseloads.

David joined the master seat vacated in December by Master Patricia Griffin, who is continuing to serve on the court on a part-time basis. Her chambers are in the Court of Chancery courthouse in Georgetown.

The newest master in Chancery has represented corporations and directors in actions before both the Court of Chancery and Delaware federal court, appearing in cases disputing transactions, contracts, corporate governance and corporate statutes.

“This court and the people and state it serves are very fortunate to get a master with the experience, intelligence, work ethic and demeanor of Bonnie David,” Glasscock said. “And personally, it is a great pleasure to welcome her back to Sussex County.”

David has authored dozens of articles on Court of Chancery matters in a number of publications, including Delaware Business Court Insider. During her time at Skadden, she has served as a director for the Delaware Bar Foundation’s governance board, the treasurer for the Court of Chancery’s historical society and an associate member of the Delaware Supreme Court’s board of bar examiners.