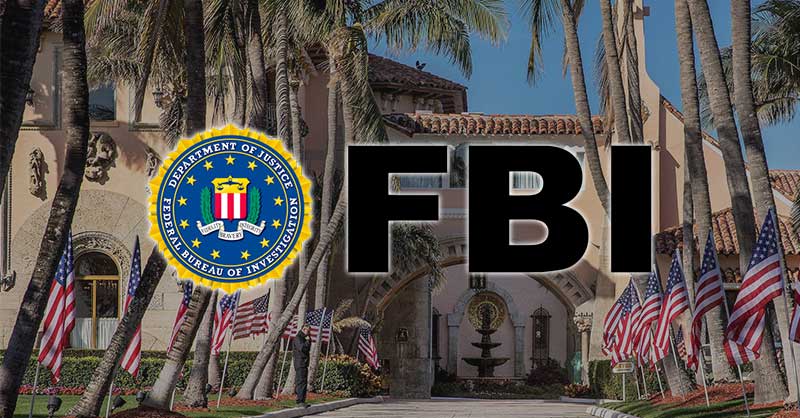 In an unprecedented act, never before happening in United States history, a former President’s home was raided by the FBI. President Donald Trump, while on personal business in New York City, learned from his son Eric that his famous Florida, Palm Beach home (Mar-A-Lago), was actually raided by 30 FBI agents, under the orders from United States Attorney General Garland, with approval of FBI Director Wray, and signed off on by a low-level Florida, Federal Magistrate named Bruce Rinehart who once defended convicted, Pedophile Epstein. The Search warrant was exceptionally broad, allowing the agents to literally take anything, anywhere in the home that had anything to do with Donald Trump’s entire Presidency.

Apparently, the unprecedented warrant was for the purpose of gleaning suspected, illegally possessed, highly classified documents that Trump was not supposed to have, which would, if proven, could be a violation of the Espionage Act?

However, the warrant was so clearly extensive in its scope, it allowed the search and seizure of everything. The agents spent over 12 hours ransacking the entire residence, including the bedrooms, the offices, the basement, and Melanie Trump’s closet, clothes and underwear drawer!

Trump’s lawyers were not allowed to observe the search and were forced to leave the buildings during the raid. The rub is that Trump and his staff had been working with the FBI and the Archives division in June. Everything was discussed and upfront. “Trump even offered to give the authorities anything they needed.” The Feds asked Trump to put an additional lock on the basement door where innumerable boxes were stored. Former Presidents have always kept documents and worked it out with the Archives division.

Nobody has seen the Affidavit which states the “probable cause” for the raid. Folks, nothing like this has ever happened before and it should not be happening now. The way this was done is absurd and beyond outrageous. Apparently, the extremely aggressive FBI agents took 20 boxes into their possession labeled with various levels of classification from top secret to personal. Trump claims that everything had been declassified by his direct orders. So folks, why was this unprecedented, obscene and tyrannical raid conducted??

Here is what I think: The Democrats and their leaders are so fearful of the possibility of the Republicans taking over the Congress in the 2022 November elections and Trump winning the Presidency in 2024, that they are on another, determined witch hunt to label him with a crime, so he can’t run and are hopeful this unethical tribulation will create so much controversy that the Democrats will maintain control of the government. I predict that, regardless of what the raid uncovers, even if nothing, Trump will be indicted and charged with a crime, just to hurt his credibility.

Folks, this entire, unethical operation is designed to deter, thwart, and cover up the horrible incompetence and tyranny of the Democrat Party and their ruthless henchmen who wish to control your lives and take away your freedom. If the Democrats and their weaponization of the FBI, the DOJ, and the IRS are allowed to get away with this and they can, with impunity, do this to a former President of the United States, imagine what they can and will do to you if you openly disagree with their policies? Be afraid, be terrified, because the constitution, the rule of law, and everything we Americans hold dear is now in jeopardy.

That’s the way I see it. Vote these monsters out in November or live in a hopeless world of mediocrity and poverty with a fanatical, ruthless, and authoritarian government determining your life and taking away your freedoms. God help us if we do not prevail.