Will Andre Bouchard’s Chancery Court Get Even Worse if Biden Indeed Wins Presidency? 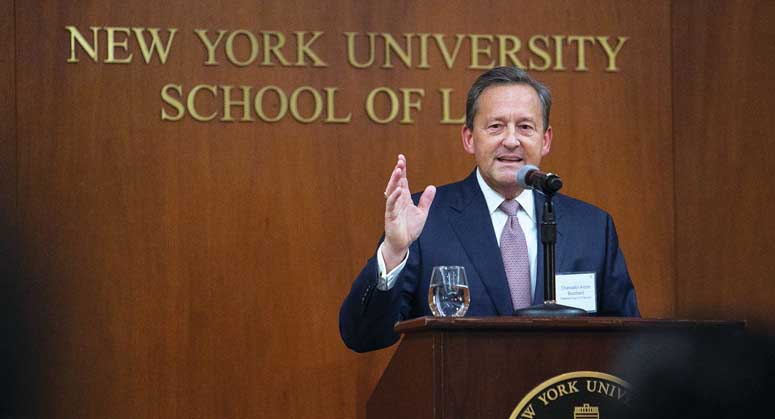 It is my opinion that Andre Bouchard’s Chancery Court has denigrated into a Court of Inequity, instead of the equity court it was once famous for. Furthermore, since I consider Bouchard one of the Godfathers of corruption, and an originator of the “Delaware Way,” I am quite sure the already bad situation in the Chancery will only get worse. Hell, why wouldn’t it?

I watched in amazement the TransPerfect case in Delaware’s Court of Chancery with blatant bias and conflicts of interest that should not have been allowed. The Chancery Court has denigrated since Andre Bouchard got there. He epitomizes the “Delaware Way,” and in my view, his former Skadden Arps co-worker Leo Strine and he are deeply entrenched.

Please read the article below written by a TransPerfect executive from just a few months ago. He has first-hand knowledge of Chancery Court Chancellor Andre Bouchard and court-appointed Custodian Robert Pincus’ disrespect for TransPerfect’s workers. Read his account about his battle against Bouchard.

More battles are needed. With the likely certification of Joe Biden as President, the “Delaware Way” may only get worse!

Why I’m continuing to fight: The state’s rigged ‘Delaware way’ must end | Opinion

Special to the USA TODAY NETWORK
Five years ago, I watched helplessly as my job and livelihood were debated in a Delaware courtroom. As a senior member of the TransPerfect team, I saw firsthand how the “Delaware Way,” a complex maze of backroom deals and self-enrichment, completely cut out the average TransPerfect employee from the decisions that would decide their future.
At the time, I was shocked by Chancery Court Chancellor Andre Bouchard and court-appointed Custodian Robert Pincus’ complete lack of care or respect for TransPerfect’s workers. Now, I know that’s par for the course in Delaware, where elite lawyers, politicians, and corporate executives enrich themselves at the expense of normal Delawareans.

We thought we were being treated so poorly because most of our employees were Delaware outsiders living in New York and across the country, but what we came to realize was that the Delaware way that protects elite interests also pushes down communities of color and other marginalized groups in the state.

While we eventually saved TransPerfect and our jobs, the rigged system that continues to fail vulnerable Delawareans stayed in place, and we became a watchdog group to fight back against the lack of transparency and accountability in Delaware’s courts and government.

Now, I’ve joined other advocates to launch a new Political Action Committee, Citizens for Transparency and Inclusion, to hold Gov. John Carney accountable for his administration’s many failures, including its disastrous handling of the COVID-19 pandemic, especially in the state’s prisons, its hollow support for racial justice, and its failure to end Delaware’s entrenched culture of political and judicial corruption.

On Carney’s watch, nearly 600 Delawareans have died from COVID-19, disproportionately poor and people of color, while over 15,000 citizens have gotten sick. We’ve also seen uncontrolled outbreaks in the state’s correctional facilities and a systematic failure to provide proper protective equipment to inmates, even after Carney and the DOC refused our offer of face masks and hand sanitizer for all inmates and staff.

Even in the midst of a public health crisis, Delaware’s communities of color have faced another scourge during Carney’s tenure — police brutality. Since the governor took office, nine Delaware citizens have been shot and killed by police officers with impunity, and protests for racial justice and police reform have been met with trepidation and too-little, too-late gestures from the Carney administration.

Carney has done nothing to meaningfully transform an unjust system in which people of color make up more than 60% of Delaware’s prison population, but only 15% of judges on the state’s top courts. Instead, in Carney’s Delaware, Black residents are incarcerated at a rate of nearly 5:1 compared to their white counterparts while the incarcerated population has been sickened and killed by COVID-19 at the fifth-highest rate in the nation.

The governor’s preferred response of “no comment” doesn’t cut in when lives are at stake and citizens are being treated as less than human. It’s time to hold Carney accountable to the communities he claims to serve, rather than letting him continue to slide by on support from the “Old Boys’ Club” of rich, white lawyers and corporate insiders.

We need to leave the old Delaware way behind: no more giving millions of dollars in government contracts and no-bid legal fees to scandal-ridden firms like Skadden Arps; no more “revolving door” between top government positions and lucrative private sector jobs; and no more hollow shows of support for Black Lives Matter and racial justice while continuing to uphold the very systems that keep Black Delawareans down.

It’s time to build a “New Way Forward For Delaware” so that not just the rich and powerful have the chance to thrive. Carney has failed the citizens he claims to serve. It’s up to us to hold him accountable so that we can have a more equitable, just, and transparent future in the First State.

Kevin Obarski, a founder of Citizens for Transparency and Inclusion, is based in Atlanta.