When Will Skadden Arps and Jennifer Voss Be Held Accountable in TransPefect Case in Delaware? 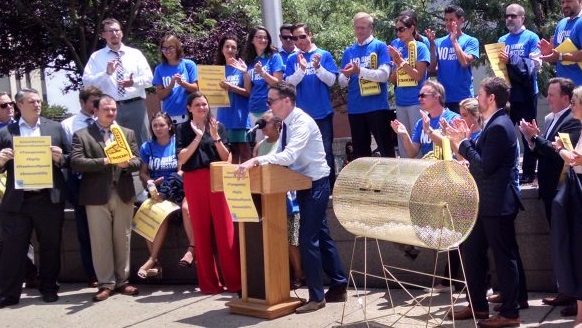 Folks, I’ll keep this short as I am outraged at the news in the TransPerfect case in Delaware’s Chancery Court. Skadden Arps attorney Jennifer Voss, who has been accused of billing fraud and padding hours by every C-Level Officer at TransPerfect. She represents scandal-ridden former Custodian Bob Pincus. When will Skadden in Wilmington be held accountable by Chancery Court, or the Delaware Supreme Court, or the police?! This woman must be brought to justice!

See the Delaware Business Now story about how Citizens for a Pro-Business Delaware is taking the Chancery Court to task for its decision about fees paid by TransPerfect since the 2018 contested sale. Keep your feedback coming on this truly outrageous and awful development!

Citizens for a Pro-Business Delaware is appealing to the Delaware Supreme Court a Chancery Court decision regarding fees paid by business services company TransPerfect over a contested sale completed in 2018.
Citizens Delaware Campaign Manager Chris Coffey released the following regarding the appeal:
“This latest filing makes clear what we’ve known all along: the Chancery Court during former Chancellor Bouchard’s reign had zero interest in treating TransPerfect fairly. Not only did Bouchard’s Chancery Court uphold an obscene $3.2 million in fees charged by Pincus – in bulk and without explanation – it even contradicted itself in forcing the company to cough up $400,000 in fees that it had previously rejected, which stemmed from a failed Contempt motion filed by Pincus. The Bouchard-era Chancery Court was so invested in protecting its handpicked Custodian – who had already bilked the company for more than $50 million in total fees – that it couldn’t even hold itself accountable to its own decisions.”
“There’s no justice when a court-appointed Custodian like (Robert) Pincus can prop up his own fees by filing frivolous motions against the very company for which he’s a fiduciary, then charge the company for the motion. And there need to be consequences for enablers like Skadden Partner Jennifer Voss, who for years has defended Pincus at every turn and now faces a litany of open lawsuits against her. It’s high time for the state’s Supreme Court to step in and end the clownery of Bouchard’s Chancery Court to deliver justice and pause the rapid erosion of trust in Delaware’s judiciary,” Coffey concluded.
Voss did not immediately respond to a request for comment, and Chancery Court cannot respond under judicial ethics guidelines.
Critics of Citizens claim the organization is funded by TransPerfect owner Philip Shawe who prevailed in a dispute over selling the company when he could no longer work with his former 50-50 partner and former fiancé Elizabeth Elting.
Shawe had run-ins with Pincus, who was appointed by Chancery to supervise the sale of the company.
Following the sale, Shawe changed TransPerfect’s state of incorporation from Delaware to Nevada and started litigation in that state. He also filed actions in New York state.
Citizens for a Pro-Business Delaware is a group made up of more than 5,000 members, including New York-based global translation services companies.
The group has also continued to attack what it views as a lack of diversity in the Delaware court system and formed ties with cable TV commentator the Rev. Al Sharpton and local Black ministers.
Earlier in July, the group asked that Tesla CEO Elon Musk join the diversity effort. Musk appeared in Chancery Court in July as part of a lawsuit by shareholders who claimed he improperly engineered the merger of Solar City, a manufacturer and installer of solar systems, with Tesla.
Citizens has long claimed the actions of Chancery Court have endangered the careers of its employees.
TransPerfect has no physical presence in Delaware, although at one point indicated it was shopping for an office site n the First State.