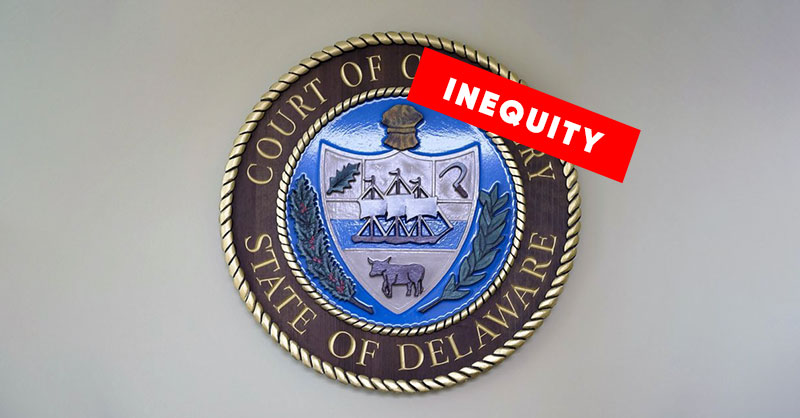 I recently wrote an article about the Delaware Chancery Court allowing over $200 million to be billed in the Twitter vs Musk case, even though Elon Musk has decided to now buy the company and the lawsuit should be dropped. This brief column is my personal follow-up.

Folks, after watching carefully for several years, this formerly revered, unique court of equity — once famous and respected nationally for resolving corporate legal problems that could not be solved internally — I believe the court has evolved into a “Good Ole Boys Club” with a select few of connected lawyers who in my view rape the system.

Seventy percent of most fortune 500 companies have incorporated in Delaware, which means that this court gets to make decisions that involve millions of dollars. It appears from my observation that the value and righteousness of a legal issue in an important case is not always the deciding factor. Many of the most successful (winning lawyers in the Court of Chancery) are former business partners with the Chancellors or connected to the Chancellor or court in other ways.

Bottom line folks, who you hire, especially if the attorney was buddies with the judge, makes a difference in the outcome? It is unfortunate that the world may not now get to see this Delaware extravaganza in operation with its innumerable conflicts of interest and appearances of impropriety. Many lawyers, I know personally in Delaware, folks jokingly call the Chancery Court the Delaware Court of Inequity.

A few connected lawyers who make their living in the Chancery Court took exception to my last article, declaring absolute integrity in the Delaware Court of Chancery. I say “BS”. Folks, throughout Delaware law, it is stated that the Appearance of an Impropriety is as bad as the Impropriety itself. When a judge has lunch with one of the opposing lawyers during the decision making time of a trial, that is the appearance of impropriety. When a judge is a former business partner of one of the lawyers in a case, that is a conflict of interest. When a judge legislates from the bench in an unprecedented manner, that is improper. When a judge allows one side to milk a litigant for millions of dollars without precedent, especially when the lawyer for that side was a former business partner of the Chancellor, I call that the appearance of impropriety. I even witnessed a Chancellor allowing bills to be submitted for the time used to create the bill. Folks, the purpose of the Delaware Court of Chancery is to provide fair and equitable solutions, not to enrich the Chancellors’ special friends.

Power eventually corrupts, and folks the Chancellors in Delaware have ultimate power. The outrageous rulings in the TransPerfect case were over the top, and to me indicated a form of subtle corruption.

Now Twitter and Musk have contributed millions to connected lawyers, all capitalizing on the unique equity industry that is alive and well in Delaware and the case hardly got started. I urge legislative change and better oversight of this unique Court, so there can never be a doubt about its integrity.