How Spot-On Local Delaware Reporting Was on the Corrupt Duo of Leo Strine and Andre Bouchard… in 2015! 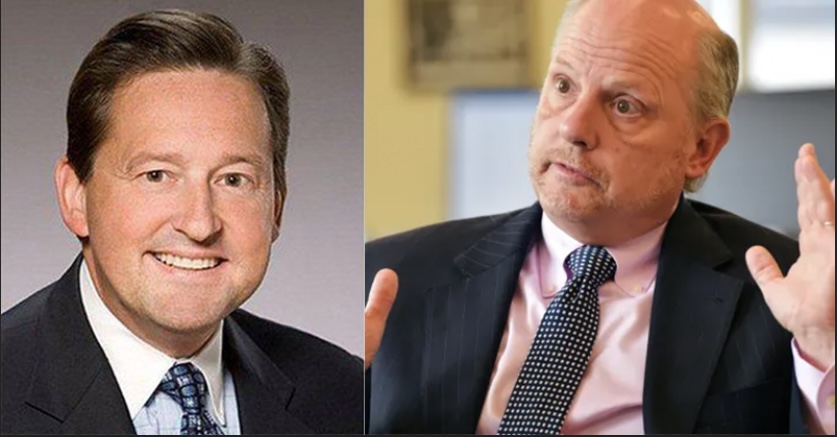 See the Delaware Grapevine article by Celia Cohen below. Ironically called “The Curious Scales of Justice” from 2015. How telling this story turned out to be.

In my view, these are the two biggest courthouse criminals in Delaware history. And lo and behold they shared an office. Imagine Leo Strine and Andre Bouchard sharing an office and then think of all that was hatched in that office.

If legislators had heeded the warning in this article, Delaware may have been spared the TransPerfect government takeover fiasco, money heist, and the ensuing negative reputation—all of which is sure to be highlighted in the Twitter v. Musk case, coming to Delaware’s Court of Chancery in October.

Let me know your thoughts on this, folks. Your feedback is always welcome and appreciated.

THE CURIOUS SCALES OF JUSTICE

The judicial gods have struck again. It was only an illusion that Jack Markell had free will as the Democratic governor, when he named the leaders of Delaware’s three major courts.

In the course of the last year, Leo Strine Jr. took over as the chief justice, Andy Bouchard became the chancellor on the Court of Chancery, and Jan Jurden just had her investiture as the president judge of Superior Court.

Strine and Bouchard once worked in the Wilmington office of Skadden, a global giant of a law firm, as new lawyers, even sharing an office. Jurden is out of Young Conaway Stargett & Taylor, one of the most prominent of the state’s homegrown practices.

This should not come as a surprise. Skadden and Young Conaway are like the yin and yang of the state’s court system.

It is well-known the courts have to have a political balance of Democratic and Republican judges, because the state constitution says so.

Somehow there is also this weird rough parity of the scales of justice between Skadden and Young Conaway, maybe because the judicial gods say so?

“It’s just coincidence,” said Bill Chandler, who has been watching lawyers turn into judges for more than 30 years, as the current chair of the Judicial Nominating Commission and previously as a chancellor and also counsel to Pete du Pont, the Republican governor from 1977 to 1985.

That is as good a mortal explanation as there can be, but whatever, it exists for sure.

The choice for chief justice was said to come down to either Strine or Jurden to run the Supreme Court, which at the time included a couple of justices who have since retired — Carolyn Berger, who had been at Skadden, and Jack Jacobs, who was from Young Conaway.

The nomination for chancellor could have gone to either Bouchard with his Skadden roots or to Dave McBride with a corporate practice at Young Conaway.

When Jurden was up for president judge, a Superior Court colleague also known to be under consideration was Eric Davis, whose lawyering days were spent at — where else? — Skadden.

Not that the state judiciary is a wholly-owned duopoly. Naturally there are plenty of other firms whose former lawyers people the top three benches of the Supreme Court, the Court of Chancery and the Superior Court, where collectively 31 judges sit.

Not to mention there is a large contingent stocked from the public side. Judges have come out of places like the Attorney General’s Office, the Cabinet and the Office of Disciplinary Counsel.

Still, there is no getting around the prevalence of the Skadden and Young Conaway judicial connections, which also extend to Karen Valihura, who joined the Supreme Court directly from Skadden, and Scott Bradley, who came to the Superior Court from Young Conaway.

At Young Conaway, where there are about 100 lawyers, the call to the bench is viewed as part of the culture of the firm, going back to its founding in 1959 and the public-minded philosophy of its original partners like H. Albert “Hy” Young, a past attorney general.

“Public service is sort of the fabric of the firm,” said Bill Johnston, a senior partner who edited a history of Young Conaway.

Johnston cited the words of the late Bruce Stargatt, an original partner who once wrote: “We have been from our earliest days led by professionals . . . [who] took pleasure in participating in activities strengthening the courts and the bar. They felt they could not be good lawyers without being good members of the community.”

Whatever prompts the leap to the bench from Skadden, a gigantosaurus of a firm that grew from modest beginnings in New York City in 1948 to 23 offices around the world, it is elusive, because Ed Welch, who heads the Wilmington operation of 60 lawyers, did not make himself available to say.

The Skadden-Young Conaway axis even goes further into public life than the courts.

It has manifested itself in the governor’s office. Mike Barlow, the chief of staff, used to work at Skadden, and Drew Fennell, the deputy chief of staff, once practiced at Young Conaway.

At the most microcosmic, it even extends to a single public official. Matt Denn, the Democratic attorney general, went to Skadden out of Yale law school but switched to Young Conaway, where he made partner.

Nor should it be overlooked that Len Stark, the chief judge of the federal District Court here in Delaware, was once at Skadden.

Oh, and Chip Flowers, the Democratic ex-treasurer now in exile, came out of Skadden, too. Never mind, no law firm is perfect.