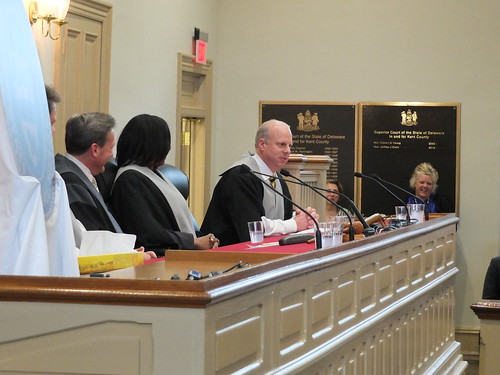 I wrote last month about the sad day for Delaware’s Chancery Court, as Vice Chancellor Joseph Slights announced his retirement. He served as a voice of reason among unjust judges including Andre Boucahrd and Leo Strine. The Good Ole Boys” cronyism and corruption in our Chancery Court, in my view, reared its head in the ugliest of ways during the TransPerfect case. I reached out to folks at the company to hear their thoughts on what Slights did for the company in recent years.

Here’s their response from a minority senior executive, who spoke to me under the condition of anonymity:

“TransPerfect and its employees thanks Justice Slights for his public service, and the work he did when employed by TransPerfect founders, in trying to prevent Chancellor Bouchard’s illegal takeover of the company. After the takeover, the company feels it was a victim of severe racism by Bouchard, the Chancery Court and its agents, like (Robert) Pincus and Skadden Arps – and we encourage Governor John Carney to change the all-white court by appointing a person of color to fill the vacancy created by the departure of VC Slights. Delaware should know, TransPerfect will never stop fighting for Justice, and to clear its name from Bouchard’s farcical and corrupt lies.”

I’m for fair, equal treatment for all. Going forward, the court needs a person with integrity like Slights, otherwise Delaware is worse off.

Please send your feedback on what this means for Delaware, folks. It’s always welcome.