Check This Out, Folks: Billboard Truck in Front of Skadden Arps Office in Delaware 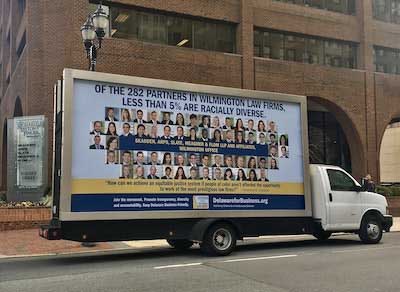 Folks, you have to check this out… eye-popping stuff happening in Delaware! Right in front of law firm Skadden Arps’ office is a billboard on the back of a truck calling the firm out for a lack of diversity. I’m going to step aside, so you can scroll down and check out the article from Delaware Business Now.

Citizens for a Pro-Business Delaware sponsored a billboard truck taking aim at the law firm of Skadden Arps.

The group, comprised of TransPerfect employees and Delaware residents, according to its website, has been calling for more diversity at the firm and others like it. TransPerfect has been in a long-running dispute over billing for a Skadden Arps attorney who served as custodian for the company deadlock.

He later ruled. in favor of Philip Shawe, who now owns all shares.

Said Citizens for a Pro-Business Delaware Campaign (CPBD) Manager Chris Coffey, “For months now our members have been calling for Delaware to make progress in diversifying its court system, but to no avail. We said from the beginning we weren’t going to be afraid of calling out those we see responsible for perpetuating a rigged system the only helps a select few, and this billboard shows how serious we are about that.

“The inequities in Delaware’s justice system, caused by a court system run by mostly white judges is a direct result of firms like Skadden Arps denying opportunities to people of color. We can’t possibly expect the judges in our courts to accurately reflect the racial, ethnic, gender, and socioeconomic diversity of this state if they aren’t given the opportunity to gain the relevant experience.

“Lacking diversity in our justice system is a national and systemic issue. But in a state that’s home to the country’s busiest corporate courts, where judges are handpicked to join an old boys’ club from top firms like Skadden, it’s critical we end the status quo.”

Skadden did not immediately respond to an Email message seeking comment.