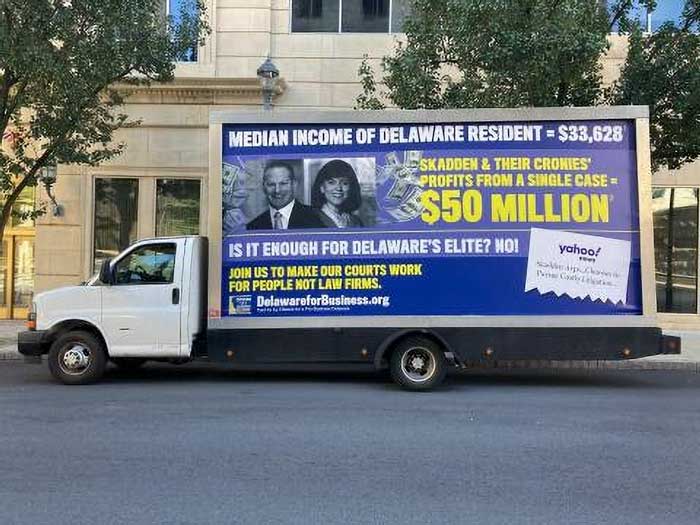 Look at this Citizen’s billboard finally calling out Custodian Bob Pincus and Jennifer Voss of Skadden Arps for what they have done, which in my opinion, is state-sanctioned highway robbery – to the tune of $50 MILLION!!

The rich get richer by scratching the backs of their fellow Country Club members – only in Delaware – and only under the false veil of legality that defined Chancery Court under its Bouchard-Era corruption.

Who is not pictured? Another crony that made over $1.7 million, Kevin Shannon of Potter Anderson. Shannon officially denied playing golf with Chancellor Bouchard during the trial; so now, it’s his word against a caddie according to Politico Magazine. My money is on the caddie telling the truth. However, Kevin Shannon did not deny being best friends with then-Chancellor Bouchard, did not deny playing tennis with him, nor being hand-picked by him for Bouchard’s prestigious hospital Board Seat – a vacancy created when Bouchard took the bench for his infamous and disgraceful reign. Nor has Shannon denied his using a forged retainer letter during trial (Exhibit JX378) to hide the premeditated dissolution plan – evidence that would have exonerated TransPerfect and Shawe from the outset.

A chorus of my reader is wondering: “When will justice come for these cronies?” Bouchard ordered his cronies Skadden, Pincus, Voss, Shannon and his former partner Steven Lamb, over $50 MILLION in unitemized fees. That’s a lot of extra-cheese on your Whopper for being public servants.

WILMINGTON, Del.–(BUSINESS WIRE)–Following a recent letter from Skadden Arps’ attorney Jennifer Voss to TransPerfect lawyers refusing to cash a payment of more than $1 million made for debts owed, Citizens for a Pro-Business Delaware (CPBD) is exposing the firm for its overzealous inclination to sue. The company continues to pay fees to Skadden after more than three years after the forced sale of the company.

The unprecedented forced sale of the profitable company sparked TransPerfect employees to start CPBD to promote transparency, accountability and diversity in Delaware courts for more just and fair rulings.

Said Citizens for a Pro-Business Delaware Campaign Manager Chris Coffey, “The residents of Delaware lose when powerful law firms can overburden the court system with more opportunities for selfish gain. Skadden Arps and their consultants have made more than 1000 times the median salary of a Delaware resident on a single case. Previous judges like Chancellor Andre Bouchard and former Skadden employees that now reign on the Chancery continue to allow the firm to sue TransPerfect and other companies rather than mediate, negotiate and serve the benefit of the public.

“We have come back year after year in hopes for change. We have received the attention of national media and we have seen small gains in exposing the way the Delaware court system is skewed to advance lawyer greed as opposed to worker and resident rights. The more we amplify the message, the more people join the effort, and we will continue on.”